In Alaska, the eruption of the Pavlov volcano 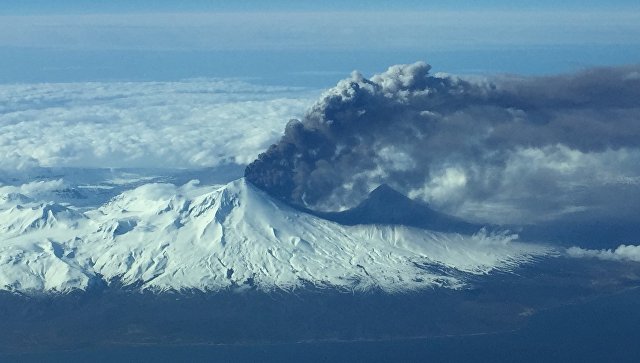 Today, the Pavlov volcano started spewing clouds of steam and smoke and throw the ashes into the atmosphere, which is accompanied by weak shocks and indicates the beginning of an eruption that scientists had predicted in early July, according to the volcano Observatory in Alaska.

As the scientists write, in the night from Thursday to Friday in Moscow, the Pavlov volcano began to throw out puffs of ash, steam and smoke that were seen by pilots flying in the vicinity of the Alaska aircraft and which are clearly visible on satellite images. Until the cloud of its emissions is at a relatively low altitude of 4.5 kilometers, and almost does not threaten the safety of air transportation.

However, this event and the recent increase in seismic tremors in the vicinity of the volcano are talking about near the beginning of the full eruption that has forced experts from the U.S. Geological survey to improve the risk index of the volcano from “yellow” to “orange”, the penultimate level of the threat.

This volcano is one of the most turbulent hotbeds of volcanic activity on Earth over the past year, he already has erupted twice, in March and in may, and predicted the eruption, according to seismologists, is “inevitable”. Even if it’s not going to happen this week, it should happen before the end of this year.

Over the last 40 years the volcano Pavlova has already made more than 40 eruptions, most of which began suddenly – on average, scientists were no more than half an hour before he began the outpouring of magma. The March eruption of Pavlov resulted in the release of large masses of ash into the atmosphere, through the cloud which flew passenger planes, which, fortunately, has not led to fatal consequences.

At the moment volcano Observatory Alaska, leading observations of the volcano Pavlov, did not increase the danger by leaving it at “yellow” level (there are two level – orange and red).