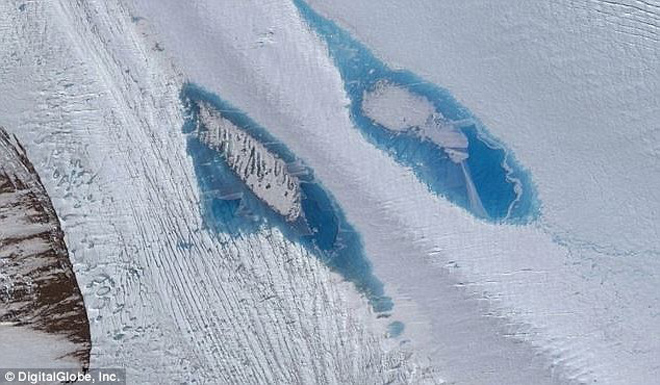 At first glance, the bright blue spots on the white caps of Antarctica — a great illustration of the beauty of nature. However, scientists warn that melt ponds in abundance observed in Antarctica, are ominous.

Almost 8 thousand dazzling blue lakes appeared on Langhovde glacier in East Antarctica from 2000 to 2013 latter-day reservoirs can be an indication that the glacier is doomed. The same lake seen in Greenland, which melts with much greater speed.

Known as nadeznikovs lake melt ponds are formed when warm air heats the surface of the ice sheet. According to a new study, lakes collect water from the glacier, weakening it, causing it crack and break apart.

Scientists from the British Antarctic service found out what part of the continent is buried under snow. The amount of bare soil was tiny — just 0.18% of the total area of Antarctica. Moreover, the researchers mapped the places free from ice cover using satellite data.

Maps rock outcropping in Antarctica — a key database for the study of the continent for a number of researchers and subject areas, including glaciology, Geology and geomorphology. Existing digital map downloaded over 2500 times over the last three years,” said the study’s lead author Alex Burton-Johnson from the British Antarctic service.