In Australia, mangroves are dying 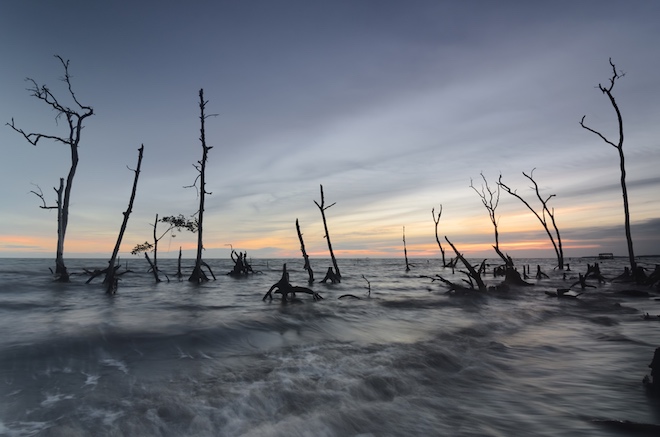 A huge zone of mangrove forests in the North of Australia have become extinct due to the cumulative influence of weather systems El niño and climate change. The death of the mangrove is a huge blow to the tourism and fishing industries of Australia.

Seven thousand hectares of mangrove forests in the Gulf of Carpentaria between Queensland and the Northern territory of Australia has dried out in just one month. Scientists call the loss is unprecedented.

Rumors about the extinction of the mangrove forests — the “cradle” of commercially important species for fisheries and for tourism — went a long time. Now anecdotal evidence confirmed by aerial and satellite imagery of a strip of coast with a length of 700 km.

“We have seen smaller-scale examples of stress caused by lack of water earlier, but what has happened now, weird. Surprised by the scale and distribution of drying throughout the southern Gulf in just one month, ” says Professor Norman Duke from James cook University (Australia). What we see is a natural process, but nature usually does it gradually. Not with such brutality. We’ve never seen before.”

The changing climate is undoubtedly one of the culprits of environmental disasters. The flames of extinction was added and drought. Instead of the usual five months of rains in the region, precipitation was only one. “Apparently, the climate becomes more variable, so we expect that such events will be more frequent,” says Duke, noting that some types of mangrove forests will never be restored.

Scientists have already received reports about the extinction of marine animals associated with mangrove death, and the heaps of dead algae that are washed ashore by the waves. “If that’s true, turtles and dugongs will begin to starve after a few months,” said the Duke.