In Bashkiria hit by hurricane-force wind

Strong wind damaged roofs of houses and power lines on the territory of two districts of Bashkortostan. The student, who was riding a motorcycle during a Gale-force wind and rain on the field, killed by lightning, reported in a press-service GU Ministry of emergency situations of the Republic on Friday.

“On the eve of the result of the passage of a squally wind damaged roofs of several houses in three villages of ishimbayskiy rayon – Isaeva, Jasenovo, Yar-Bishkadak. In the village of Biscari the Tuymazy district wind had partially ripped off a few sheets of corrugated sheets and slates from the roofs of five houses and disrupted power supply”, – said the press officer.

According to him, as a result of incident nobody has suffered, socially significant objects are not damaged.

At the moment the power supply in the village of Biscari restored in full. Works on liquidation of consequences of hurricane will continue.

As reported, the day before after heavy rain and squally wind in Ufa there were about 40 cases of falling of trees and branches. In the Kirov district on the street of Gogol by a falling tree branch injured a woman. She was taken to a city hospital and after examination was discharged from the hospital.

In addition, on the street of Novorossiysk with a falling tree damaged a power line outdoor lighting. In Dagestan, 13 Shota Rustaveli, 39 trees fell on parked cars, the Forest passage, 4 and opposite GKB N 21 – on the roadway. 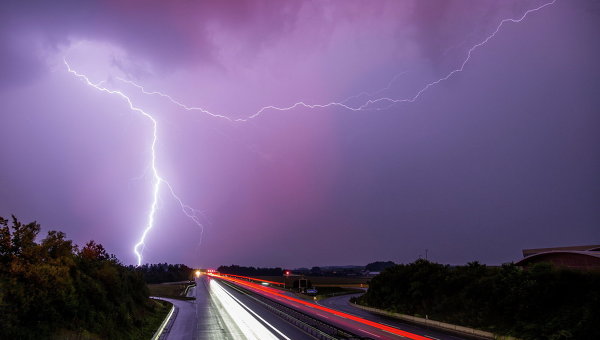 The student, who was riding a motorcycle during a Gale-force wind and rain on the field, killed by lightning in Bashkortostan, said senior assistant head of the regional SK the Russian Federation Svetlana Abramova.

On Thursday afternoon in the region storms: squally wind and rain storm. EMERCOM of Bashkiria declared a storm warning of adverse weather conditions.

“The message about the discovery of the bodies of 13-year-old boy in a field near the village Konstantinogradovka Sterlitamak region was reported to the police. Previously it is established that the boy was back from the lake on a motorcycle on the field, and it was struck by lightning. The child died at the scene,” — said Abramov.

Investigators looking for witnesses of the incident, a forensic medical examination to establish the cause of death.