In California to strengthen collapsing dam 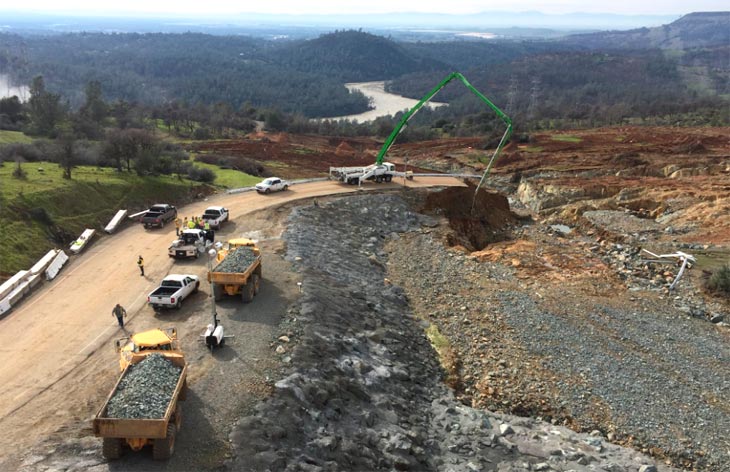 Repair the collapsed dam Oroville in California can cost $ 200 million, according to the Department of state for water resources. Water is at the highest in the United States the dam in Oroville started to overflow from the main and emergency spillways on Saturday after heavy rains. Then the government announced the destruction of the dam, and announced immediate evacuation in the area of emergency.

Restoration of damaged concrete diversion dam Oroville it will cost from 100 to 200 million dollars, — said the Agency with reference to Director of the office of bill Croyle. According to him, maintenance crews are already working on a plan to rebuild the dam.

The state of California had previously reduced the level of danger due to the destruction of the dam Oroville to warnings about possible evacuation and allowed nearly 200 thousand evacuees to return home. The Oroville dam is the tallest in the United States, the volume of the lake which it traverses, is more than 4 cubic kilometers of water.

The US President Donald trump has provided Federal assistance to California in connection with the emergency at the dam.

The US President Donald trump has declared a state of emergency in California because of the threat of a dam break on lake Oroville. On Wednesday, February 15, the press service of the White house.

“The President today declared a state of emergency in California and requested to provide Federal support to the state in connection with emergency conditions due to the threat of the destruction of the dam at lake Oroville, which was announced on 7 February and continues to this day”, — the document says.

Trump also ordered the Department of homeland security and Federal emergency management USA (FEMA) to coordinate their actions to provide assistance to the state. Monday with a request for financial support in an emergency situation to the White house addressed the Governor of California Jerry brown

On 14 February the local authorities allowed residents evacuated from the area of lake Oroville due to the threat of a dam break, to return home. However, people are warned that they must always be aware of what is happening and be in a state of readiness for appropriate action, if the threat will increase.

12 February on the cause of the traces of erosion on the primary and secondary drainage systems of the highest hydraulic facilities in the United States — Oroville dam — was declared the evacuation of residents of three nearby counties: Sutter, Butte and Yuba. Only about 120 kilometers away from dangerous places have taken about 188 thousand people.