In Canada, the river disappeared 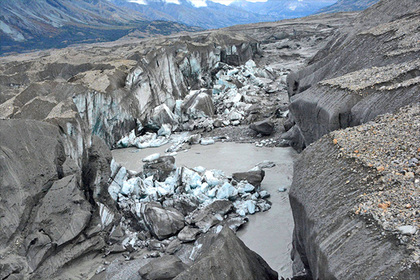 Scientists from Canada and the United States found that in 2016 one of the rivers of North America disappeared.

Specialists found that in 2016 the Slims River, located in the Yukon, whose waters flowed in the northern direction (towards the Bering Sea), practically ceased to exist, fed the same lake.
The reason for the shallowing of the river was a retreat deep into the continent of one of Canada’s largest glaciers, Kaskavulsh.

This natural phenomenon has changed the system of runoff canals established during the last several thousand years, as a result of which the water from the glacier began to flow not in the northern direction, across the Slims River, but in the southern one, across the Kaskavulsh River towards the Pacific Ocean.

The cause of the accident is called global warming. The Slims River existed in 2015. Detecting its disappearance specialists were able to use satellite imagery and explore the territories using drones.

The authors of the study note that in fact the sudden disappearance of the river can not but affect the local ecosystem, but note that there are no threats to the population depending on sources of fresh water.