In Central Africa, thousands of fires are raging 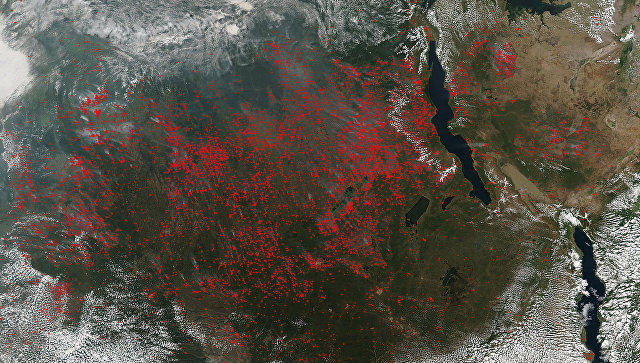 Almost the entire territory of Central Africa between the Sahara and the Great African Lakes in the east of the continent was covered by forest fires, most of which broke out due to farmers’ fault, according to NASA’s Goddard Space Research Institute.

Every year, forests on almost every continent of the Earth become victims of mass fires, caused by both natural processes, and careless and even purposeful actions of people. For example, one of the reasons for the occurrence of fires in Transbaikalia two years ago were residents of the region, who planted bonfires in the forests of the region and burned grass around their dachas.

Something similar, but in a more massive form, as NASA experts say, occurs in Central Africa, where primitive slash-and-burn farming still prevails. Every year, farmers in this part of the “black continent” cut down and burn large areas of the jungle, use them for several years and then pelted, moving to a new forest site.

The growth of the African population, global warming and the increase in fires for other reasons, including lightning strikes, has led to the fact that the areas of similar fires have expanded significantly in recent years.

The latest shots received by the VIIRS onboard the Suomi NPP climatic satellite show that today thousands of fires are raging in Equatorial Africa, which saturate the air with ashes, aerosols, carbon monoxide and other combustion products. This, according to scientists, significantly worsens the air quality in Africa and adversely affects the lives of farmers themselves, using fire to clear fields.