In Chile, after a powerful earthquake occurred hundreds of aftershocks 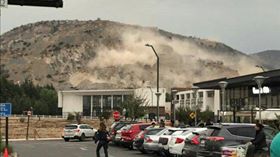 More than 130 repeated tremors were recorded in Chile after an earthquake of magnitude 6.9, which occurred off the coast of the republic on April 24.

This was announced on Tuesday by the deputy director of the National Seismological Center Mario Pardo.

Pardo also did not rule out that an earthquake of greater power could occur in the same zone, but tremors of magnitude 8 or more “are very unlikely.”

According to the National Seismological Center, the epicenter of the magnitude 6.9 earthquake was 72 km west of the city of Valparaiso, which is home to over 282 thousand people. The hearth of the earthquake lay at a depth of 13.2 km. There were no reports of injuries or serious injuries.

Immediately after the earthquake in the coastal regions of the Valparaiso and O’Higgins regions, evacuation was announced, but within a few minutes the Hydrographic and Oceanographic Service of the Navy of Chile reported that there was no tsunami threat, and the alarm was canceled. The tremors were also felt in the Argentine cities of Mendoza, San Juan and Cordoba.