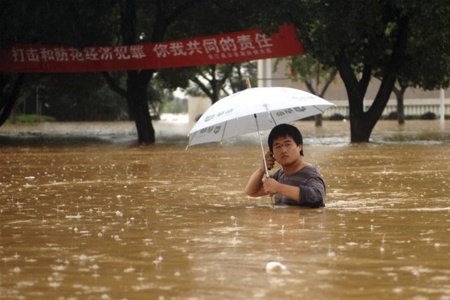 Heavy rains in the Pokolbin district of the Jiangxi province led to the exit of the banks of a large reservoir Bintang, bringing in the flood zone were thousands of private homes.

Rescue services promptly evacuated more than 5.6 thousand villagers living near the reservoir. Thanks to prompt actions of rescuers managed to avoid numerous victims among the local population.

As reported in the administration of Jiangxi province, the water gradually decreases, however, the situation in certain areas remains extremely challenging. Most of the rivers overflowed, destroyed thousands of houses, flooded thousands of hectares of crops.

“The water rose to 2 meters in just a few hours. My wife climbed onto the roof and wait for rescuers”, — told reporters about the incident, one of the villagers in Jiangxi province.

In neighboring Hunan province evacuated about 18.5 thousand people in Guizhou authorities evacuated from dangerous areas more than 1,5 thousand local residents. Adverse weather conditions have been established for more than 10 days ago. On June 21 the National meteorological Bureau of China reported that the improvement in the weather will occur no earlier than June 30.

In the period from 18 to 21 June in the floods in the East and South of the country killed 22 people, 15 people missing.