In Ecuador there is a rupture of San Isidro

April 16, in Ecuador an earthquake. The epicenter was located 27 km from the city Muisne in a sparsely populated part of the country and 170 km from the capital Quito. The magnitude of the earthquake reached 7.8 points on the Richter scale. In the underground cataclysm there have been numerous destruction. Killed 659 people, 40 were missing, 27732 were injured.

Immediately after the quake in the village of San Isidro was marked by the appearance of cracks in the surface of the earth. At the moment, for the time elapsed since the disaster, the depth of the faults in this area reaches a depth of over 20 meters.

Failures consumed 117 hectares of agricultural fields and destroyed the nearby farm. Killed more than 100 head of cattle.

The owner of the farm Gonzalo Loor says that first he heard a great roar, the whole family at this time was in the house. The building shook, it went crack, he began to crumble the ceiling. Gonzalo brought outside the gente, 5-year-old daughter and infant nephew. The house was collapsing right before their eyes, and around in the ground appeared a huge crack. 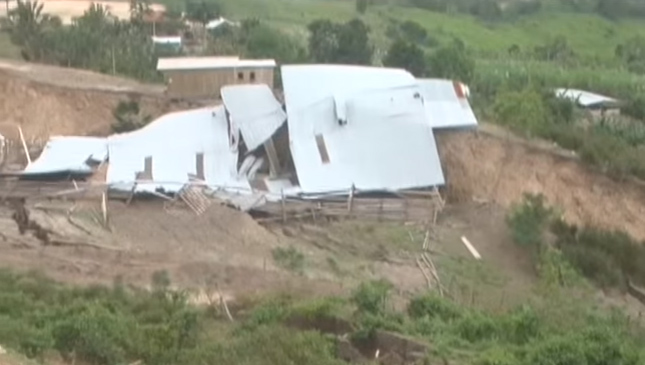 Relegating the family to a safe distance, the owner of the farm returned to rescue Pets and had to withdraw from the pens of about 20 cows and calves, but then the building collapsed killing the remaining stock. Even as much as four days, the family left homeless to survive in the midst of collapse and cracks in the ground. It was a real Apocalypse. On the 5th day started with heavy rains, but finally help came and they were able to get a rescue group.

Locals avoid these places and already called it a fault zone of San Isidro.