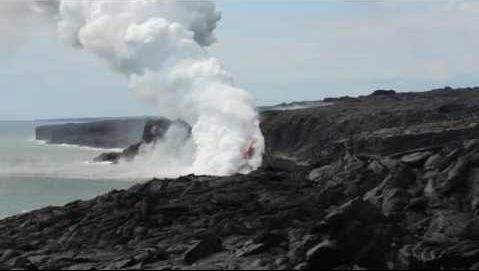 You are going to visit Hawaii and you hope to look how the red incandescent lava joins the Pacific Ocean? Forgive, but Mother Nature interfered with your plans!

Ten hectares of the island of Hawaii — the so-called lava delta created by a lava stream from the fissile volcano — collapsed to the ocean on Saturday therefore the stream of rock and steam soared up into air.

The fallen delta created huge waves which partially washed away the sea rock, including the express observation deck of the Hawaiian national volcanic park.

Nobody suffered, the administration of the park reports. On a piece of the cooled-down black lava there were no tourists, and tourist helicopters did not fly by over the site during a collapse which occurred in the late afternoon.

But 4 hours later on a hair from death appeared five tourists. Careless fans of extreme sports ignored a rope protection, having wished to admire a lava stream. Inspectors of the park expelled visitors in 15 minutes before the rock on which they stood collapsed to the ocean.

The territory is still fenced with a rope. Duty inspectors reported that they heard a loud crash under a surface that indicates the happening geological changes.

Restriction for flights of aircrafts at the height below 300 meters over the dangerous place is introduced.

The lava from a volcano of Kilauea reached the ocean at the end of July for the first time for 3 years.

Scientists from the Hawaiian volcanic observatory of Geological service of the USA continue to monitor activity of the last lava stream of Kilauea which carries the name 61g.