In Indonesia, a python devoured a woman 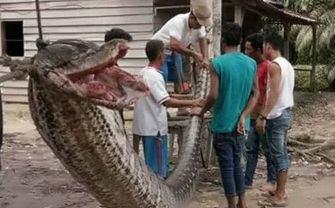 The body of the woman was found in the stomach of an eight-meter python in the southeast of the Indonesian island of Sulawesi.

As noted, the 54-year-old local resident Wa Chiba disappeared on Thursday evening, June 14. She went to check the corn planting about a kilometer from her house.

After the next morning the woman did not show up, her family sounded the alarm, the newspaper writes. In search of Wa Tiba went to her sister, but found on the ground only traces, a lantern, shoes and a machete.

The woman asked the local people for help. After a while they found a large python with a bloated stomach near the plantation. Killing and opening the snake, it was found the body of the missing.