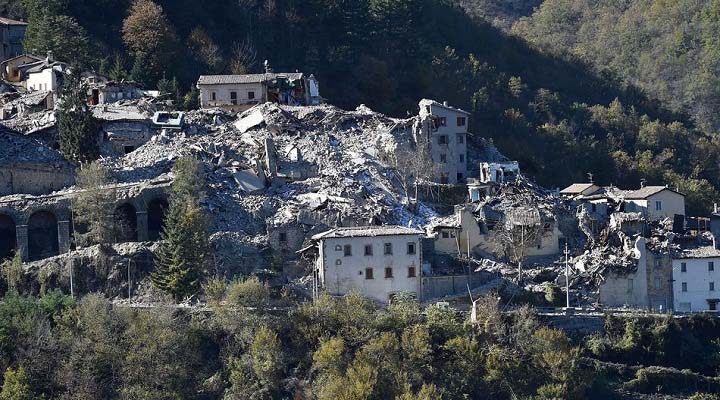 The past few months, Italy is experiencing a serious increase in seismic activity. The tremors from Aug 24, has claimed the lives of hundreds of people, and an earthquake of magnitude 6.5 that occurred in the state on October 30 was the largest in the past few decades. Many Italians are forced to live in tents and temporary shelters, fearing to go to their homes under the threat of new tremors.

In this regard, the question arises why in Italy there is so many earthquakes? And what will happen to the Peninsula in the future? It should be noted that the state had previously experienced a major seismic event. In 1980 from the shock of magnitude 6.9 near Naples killed about 3,000 people in 1990, the victims of the earthquake M5.6 19 residents of the island of Sicily. In 2002, was killed 30 people in Molise, in 2009, more than 300 Italians killed’aquila, in 2012, 25 of the victims had brought the disaster in Emilia-Romagna.

These natural disasters are only disasters that have hit Italy since the end of XX century. However, the Peninsula was suffering from high seismicity and in earlier times. So, in 1783, five large aftershocks of magnitude 6.5 struck Calabria and kill more than 50,000 people. Says Gianluca Valensise, a seismologist from the National Institute of Geophysics and Volcanology, Italy, the last tremors are more normal condition for the country than the relative calm that she experienced from the late eighteenth to the late twentieth century.

The fact that Italy is at the junction of two tectonic plates (African and Eurasian) and on top of two main fault lines, so the high seismicity is a common phenomenon for this region. According to Valensise, earthquakes of magnitude 6.0 and above create tension in the earth’s crust, which is distributed through interconnected faults and can cause them to rupture. This process can continue indefinitely in a Domino effect and cover hundreds of kilometers of earth’s surface.

According to experts, in the coming weeks is very likely to happen, the aftershock is strong enough. Valensise does not exclude that a new seismic event will shake other regions of the country. However, in addition to earthquakes over the Peninsula hung another, equally serious threat. In Italy is some potentially dangerous volcanoes, which can inflict far more damage than the tremors.

Vesuvius, recent times have shown activity in 1944, long dwells alone, however, the new eruption could start at any moment. Knowing this, the Italian volcanologists and the Agency of civil protection of Italy updated the plan for the evacuation of Naples, who promised to present to the public by the end of October.

A lot of fears inspire and Albanska mountains near Rome. But the greatest risks still carries Campi-Flegrei (Phlegraean fields) is a large Caldera located West of Naples. This giant is a real killer and is capable of a super eruption that could lead to millions of casualties and global climate change.

Proven that major earthquakes can cause new earthquakes at large distances (up to 1000 km), therefore, any seismic event in Italy may affect dormant volcanoes. As said Sunday the Prime Minister of Italy, the country has enough resources for reconstruction of homes, churches and infrastructure, and meanwhile the ground beneath the feet of the inhabitants of the Peninsula continues to shake and move.