In New Zealand, rabbits were saved from flooding on the backs of sheep 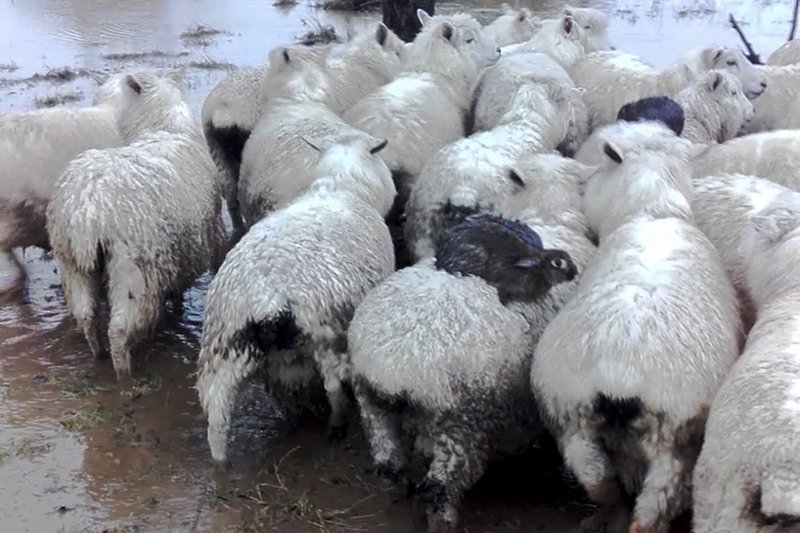 In New Zealand, three rabbits were able to escape from the flood, jumping on the back of a herd of sheep. The case of such unusual mutual assistance among animals was noticed on July 22 by a resident of the South Island of Ferg Horn, during a flood that happened near the city of Dunedin.

The 64-year-old Horn led a herd of about forty sheep belonging to his neighbor who was away on a hill, when he saw dark spots on the backs of some animals.

Horna was surprised, because he knew that his neighbor did not have sheep with black spots. At first the man decided that some garbage had been sprayed onto the animals’ backs. Looking more attentively, he saw that in reality three rabbits are sitting on the sheep.

The man took his smartphone and photographed the seen spectacle. According to him, the rabbits were soaked in the rain, but in general they felt normal. Sheep at the same time were in the water about eight centimeters deep.

Traditionally in New Zealand rabbits are considered pests, and farmers usually shoot them. However, according to Horn, what he saw so touched him, that he decided to keep these rabbits alive.

While Horn drove the sheep to a dry place, the rabbits continued to rest on their backs, clawing at the sheep’s wool with their paws. After a while, when the man returned to visit the herd, the rodents had already disappeared.

Later, the farmer sent a photo to his son, who posted it in social networks, and also sent it to a local newspaper.