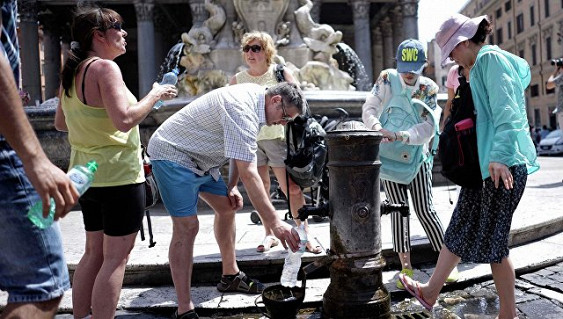 About 1.5 million inhabitants of Rome risk being left without fresh water as a result of the decision of the authorities in the metropolitan area of ​​Lazio, who, due to a severe drought, imposed a temporary ban on water abstraction from Lake Bracciano.

This unprecedented decision will come into force on July 28. The reason for its adoption was an emergency caused by the strongest heat, which was established in the Apennines from the very beginning of the summer. Climatologists note that last June became the hottest in the almost 200-year history of meteorological observations, except for the anomalously high temperatures of June 2003. In July, temperatures in many parts of central and southern Italy came close to historic highs, which led to severe forest fires and a sharp shallowing of a number of water bodies.

“Unfortunately, we are dealing with a tragedy: the level of Lake Bracciano has decreased so much that it threatens a natural catastrophe, which even it was difficult to imagine until now,” Lazio President Nicola Dzingaretti said on Saturday in an interview with the news television channel Tgcom24.

“According to our decision, the ban on water abstraction will begin to operate in a week, we have seven more days to use all the opportunities and minimize the inconveniences for citizens, but it would be wrong to turn a blind eye to the existing problem, which is very serious. Ends, and everyone should be aware of this, “- said the head of the capital region.

According to experts, the decision of the authorities of Lazio can lead to the fact that about 1.5 million inhabitants of the Eternal City can remain without water. In this situation, the Italian capital, apparently, will have to introduce strict measures to rationalize water consumption.

However, the management of the company Acea, which deals with the water supply of Rome, considers the decision of the Lazio leadership “abnormal, illegal and, most importantly, absolutely useless in terms of protecting Lake Bracciano.” This was announced on Saturday by SkyTg24 to the head of the company Paolo Sakkani. “Acea takes 86 thousand cubic meters of water a day from this lake, which means its level is lowered by a half millimeter, while the depth of Bracciano is 164 meters,” he stressed.

Serious concern about the situation was expressed by the mayor of Rome, Virginia Raji. She called on the authorities of Lazio and the management of Acea to come to an agreed decision and “do everything possible to provide water to citizens, hospitals, fire service, trade institutions.”