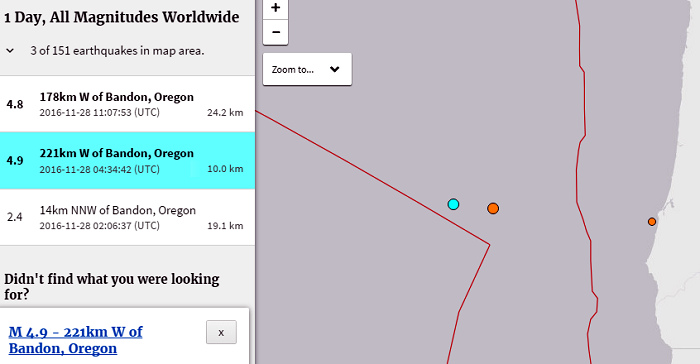 Two strong earthquakes occurred in the subduction zone Cascadia. The first had a magnitude of 4.9 on the Richter scale and was located in Oregon, with its epicenter at a depth of 10 kilometers.

The second occurred after 6 hours at 178km from city of Bandon, with its epicenter at a depth of 24 kilometers with a magnitude of 4.8.

These two earthquakes were preceded by a series of weaker earthquakes recorded just 14 kilometers from the city of Bandon with epicenters at a depth of 19km.

The Cascadia subduction zone stretches from Northern California to Vancouver, Canada and is the most likely site of a major earthquake in the United States, the magnitude of which is able to achieve performance in 9.0. The last time a similar event occurred in the region in the 1700’s and triggered a large tsunami that struck the shores of present-day States of California, Washington and Oregon.