In the central Italy there was a strong earthquake 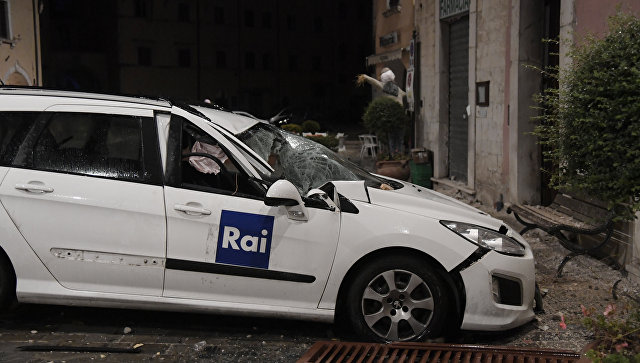 The strong earthquake has happened in Sunday in the central Italy at 07:41 (09:41 Moscow time). According to local RAI TV, magnitude of earthquake has made 7,1. On the website of the European Mediterranean seismological center (EMSC) it is reported that epicenter of an earthquake was at a depth of 10 kilometers, its magnitude has made 6,6.
The push was such force and duration that many residents of the Italian capital still sleeping at this time have woken up from the fact that walls of houses shiver.

Fluctuations of the land surface were felt across all Italy.

Later seismologists of National institute of geophysics and volcanology have specified information on earthquake force. According to them, magnitude has made 6,5.

Data on destructions arrive first of all from areas to Brand and Umbria. In the settlement of Ussita there is practically no whole building left. In the city of Norcha two ancient churches are destroyed. Report about serious destructions also Akuasant Terme city authorities.

In Rome after an earthquake operation of the subway is suspended.

Given about injured Russians so far isn’t present, the embassy is in continuous contact with service of Civil defense of the country.

za the last week this not first strong earthquake which is felt by residents of many cities of the central Italy.