In the icy Greenland, a giant peat fire is blazing 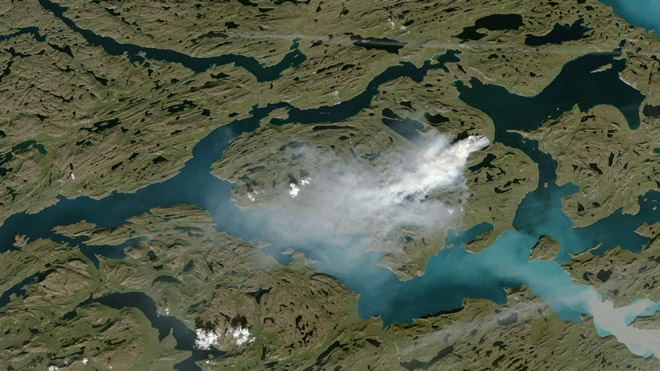 Greenland with the capital of Nuuk is located to the north of the Arctic Circle and it is known mainly for one thing – ice. Almost 80% of the country is covered with frozen water, mainly in the form of glaciers. But surprisingly – now there is burning a huge forest fire 150 km north-east of Sisimiut, where there are 5.5 thousand people, and which is located on the west coast of Greenland.

Of course, this is not the only place on the planet where forests are burning. But for the icy island such a fire is quite strange. Forest fires occur periodically in Greenland, but they are very rare. The fifth part of the country is ice-free, and shrubs grow on it, mosses and grasses are excellent fuel for fire. Previously, the conditions in Greenland were unfavorable for the development of large fires. Large fires occurred infrequently and there were huge distances between them. Now the situation is changing.

In recent years, in Greenland, as in much of the Arctic, the temperature rises. For some unknown reason, surface water disappears on the island. The country is drying up. This combination means that a common natural phenomenon – for example, lightning – can ignite a spark that can give rise to a real inferno.

Earth Observatory satellites first noticed the fire in Greenland on July 31. Over the next week, two instruments on satellites – the MODIS spectroradiometer and a radiometer for imaging in the infrared and visible ranges of Suomi – made daytime photos of the fire. The operational shaper of the images of the earth (OLI) on the Landsat-8 satellite also photographed the fire.

Only in 2017 MODIS detected more fires in Greenland than the satellite “Aqua” for 15 years of operation. With regard to CO2 emissions, the year 2017 has updated the record for 2015, when a very large fire has also erupted.

The fire causes fears, because, probably, the peat burns. Peat – a mixture of plant material at different stages of decomposition in a moist, low-oxygen environment. Since peat is formed in water, it usually does not burn. But when the water dries, peat can burn slowly at low temperatures for months and even years. In the process, peat fires emit huge amounts of CO2, accelerating climate change, and, correspondingly, learning similar events.