In the Kuriles intensified Chikurachki volcano 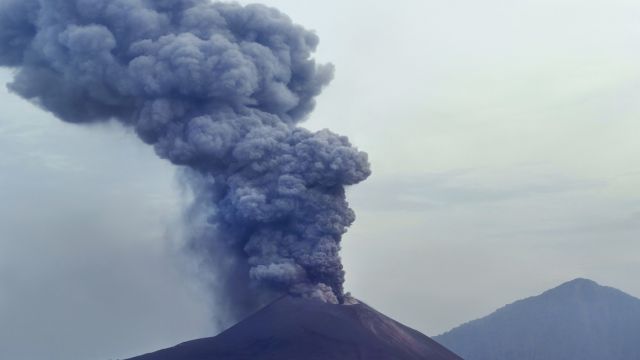 The Chikurachki volcano located on the northernmost inhabited island of the Kuril Islands Paramushir, threw ash to a height of five feet above sea level, according to the Kamchatka group volcanic eruption response (KVERT).

“According to KVERT, ash rose to a height of five feet above sea level, the length of the column of ash is about 100 km North-East from the volcano,” — said on the KVERT website. The phenomenon is assigned to code orange hazard the volcano poses a risk for the movement of aircraft on local airlines.

Awakened Chikurachki volcano in the Kuril Islands covered with a thin layer of ash on the island of Paramushir, Vice-mayor Severo-Kuril city district Alexander Ovsyannikov.

“Special effects from that woke up the volcano, we did not feel, but a slight layer of ash is particularly well visible on the machines, it is similar to soot”, — said Ovsyannikov.

The highest point of Paramushir – Chikurachki volcano — on the eve threw the ash to a height of five kilometers above sea level, reported the Kamchatka group volcanic eruption response (KVERT). According to KVERT, the length of the column of ash is about 100 km North-East from the volcano. On Thursday morning, the train reached Cape Lopatka on the Kamchatka Peninsula. Volcano assigned code orange danger.

Institute of Volcanology and seismology Feb RAS Leonid Kotenko explained that the North-Kurilsk Chikurachki is not in danger.

“It is 62 kilometers from the city. But if there is something more serious than these ash emissions, is under threat may be aircraft, here planes fly to Vladivostok and Khabarovsk,” — said the scientist. According to him, the volcano is capable of a catastrophic eruption, which he proved in 1986 when five hours of the eruption of the 20 kilometers from the volcano fell 12 meters of slag.

The Chikurachki volcano with a height of just over 1800 meters, located in the southwestern part of Paramushir. The last eruption here was recorded in April of 2015.