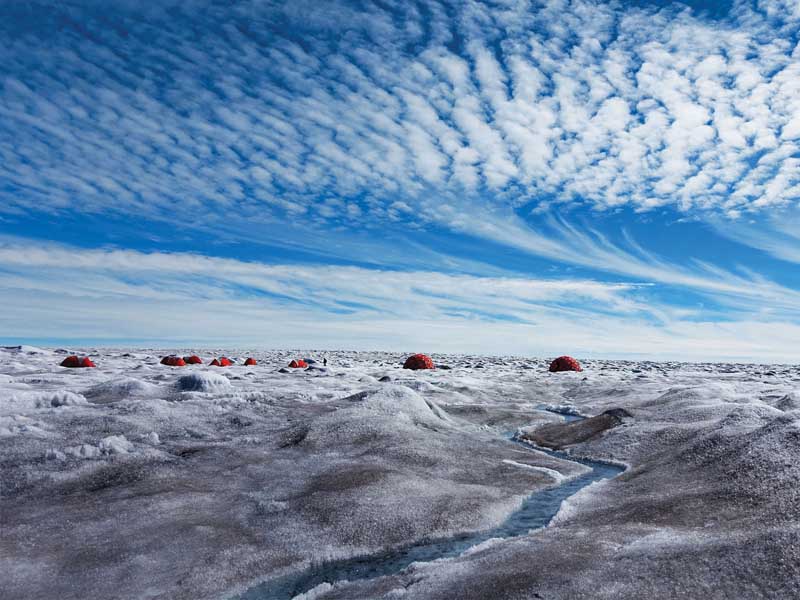 The thick ice cap of Greenland, which is three times more than Texas, currently melting faster than ever, thus contributing to sea level rise. It would seem that everything about global warming, but scientists argue that the melting of the Greenland glaciers, there is another important reason: the algae.

Greenland is the largest island in the world, whose area is 2 130 800 km2, the area of the ice sheet — 1726 000 km2, which is 81% of the whole territory. A four-year research project called Black and Bloom was launched this year in order to determine how algae, bacteria and other microorganisms alter the albedo, or reflectivity of ice.

Remember from school physics course that the black color absorbs sunlight? Because “blooming” water is darker than ice (as shown above), laced with algae of the thickness of the ice absorb more heat, which means faster heat up and it melts. This process is cyclical, because the more a glacier melts, the more favorable the conditions for growth and reproduction of algae there is and all repeats anew.

“We have a suspicion that microscopic algae in the ice spend their entire life cycle,” said Christopher Williamson, lead researcher of the project. When scientists will a more complete understanding of exactly how microorganisms affect the rate of melting of ice, they will be able to more accurately predict the dynamics of changes of the Greenland ice sheet under global warming. Now the expedition decides where and when will be conducted the following measurements and data collection. To work in complete glaciation of the territory is very difficult, so they have to verify in advance all the risks and adhere to a strict schedule of field work.