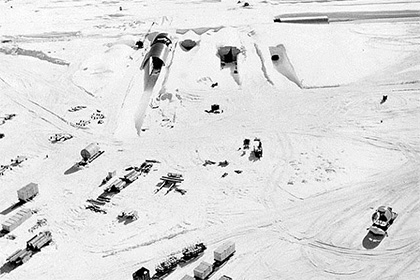 Researchers from York University in Canada found that global warming could lead to release of nuclear waste buried in the Greenland glaciers. It turned out that the melting of the ice contributes to the exit surface buried under a thick layer of snow Camp Century military base.

Camp Century was built under a secret American project, the “Ice worm” (Project Iceworm). It was planned to hold a series of tunnels in the ice shield of Greenland and placing several hundred nuclear missiles. Soon, however, the project was closed, the military base has been decommissioned and its infrastructure and wastes, including radioactive and chemical substances, remained buried under the ice. However, the study showed that global warming could cause part of the ice sheet surrounding the Camp Century, will melt.

The researchers analyzed military documents and found that the database contains about 200 thousand liters of diesel fuel and 240 million liters of wastewater. The latter may contain polychlorinated biphenyls, and radioactive coolant from nuclear generator, which supplied electricity to the Camp Century. According to researchers, these wastes pose a danger to the environment, because they can get into the ocean and affect the marine ecosystem. The simulation results of climate change indicate that extensive melting of the glacier will begin in about 2090.