In the ocean killing coral reefs 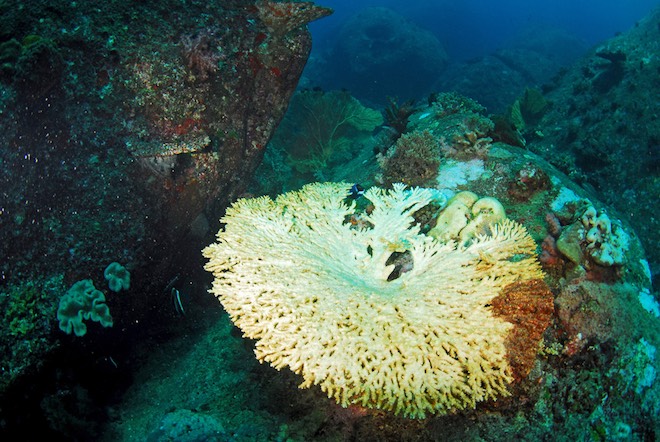 Coral reefs do not have time to recover from a two-year global bleaching event, when it became known that the destructive process will be delayed for another year. Coral bleaching leaves a huge strip of ocean biomes dying or dead, said the researchers.

Warmer oceans affect corals of the planet from mid-2014. A strong El niño, which, however, already eroding, acts as a catalyst and warming, as a consequence, “Postiguet” the destruction of corals. “This is the largest and longest coral bleaching that has ever happened,” says mark Yixin, coordinator of Services for monitoring coral reefs NOAA.

Bleaching occurs when algae living in the corals, leaving the reefs due to warming water. Colorful ocean structures become ghostly white. But if fever continues, the corals die.

On the Great Barrier reef along the coast of Australia 93 % of corals showing signs of bleaching. More than one third of the corals in some parts of the Grand reef have already died.

NOAA scientists say the reefs of the archipelagos of Palau and Micronesia with 90% probability will show this year signs of bleaching Hawaii, GUAM, the virgin Islands and the Gulf of Mexico are also in the mode of increased readiness for the autumn inclusive.

Over 70% of U.S. reefs already subjected to prolonged exposure to high temperatures, which can cause discoloration, says the NOAA.

Scientists attribute the high intensity bleaching with climate change. Anthropogenic global warming has warmed the oceans, forced to raise the water level in the seas, ice — melt, and corals to discolour. With the arrival of El niño, the situation has worsened, and the third global discoloration lasted for another year. Two previous bleaching occurred in 1998 and 2010.

Corals can recover from bleaching if the temperature of the water will be back to normal. But scientists warn that repetitive discolorations that last for years, beat the previously injured reefs with the power of an experienced boxer.