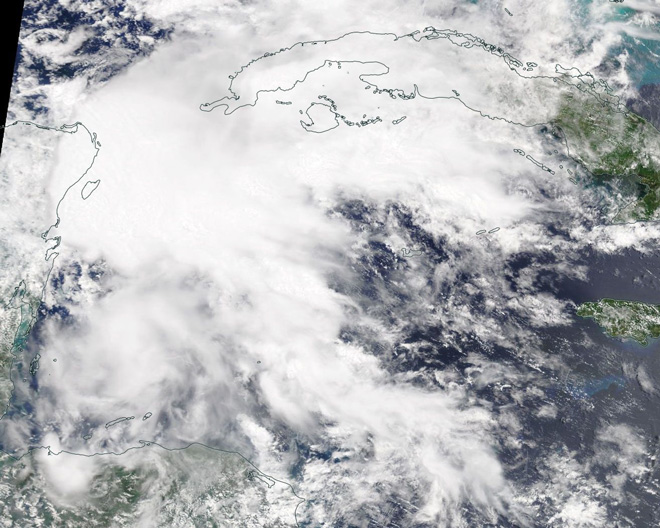 On Saturday, the states of Florida, Alabama and Mississippi declared a state of emergency in connection with the approach of Hurricane Alberto. Currently, it is moving off the coast of the Gulf of Mexico, causing heavy precipitation and flooding in coastal states.

“Alberto” was the first storm in the season of Atlantic Hurricanes in 2018. According to the US National Meteorological Service, it is expected that when the tropical storm reaches the northern coast of the Gulf of Mexico, its intensity will increase and the wind speed will reach 40 km / h.

A warning of a tropical storm was issued for areas from the border of the states of Mississippi and Alabama to the Auchilla River in Florida. In the eastern part of Louisiana to Mississippi, Alabama, and the western parts of the states of Tennessee and Florida, 13-25 cm of precipitation may fall out.

According to Florida Governor Rick Scott, a state of emergency was declared in all 67 districts of the state to give local authorities enough time and resources to prepare for a storm that will bring with them showers and floods. His colleagues from Mississippi and Alabama also declared a state of emergency, citing the threat of coastal and inland floods. Governor of Alabama Kay Ivey declared a state of emergency in 40 districts. The Governor of Mississippi, Phil Bryant, asked the people of the state to follow the news and prepare for the disaster, asking to pay special attention to security measures for those who live in mobile homes and lowland areas.

On Saturday evening, the weather system was 153 km north of the west coast of Cuba and 440 km southwest of Dry-Tortugas National Park, an archipelago off the south coast of Florida, 120 km west of Key West.

On Saturday, Alberto, formed a few days before the official start of the hurricane season in 2018, moved north at a speed of about 20 km / h, the speed of a steady wind reached 64 km / h. It is forecasted a gradual increase in the storm as it approaches the northern coast of the Gulf of Mexico.