In the USA, alligators emerged from water bodies after Hurricane Eta 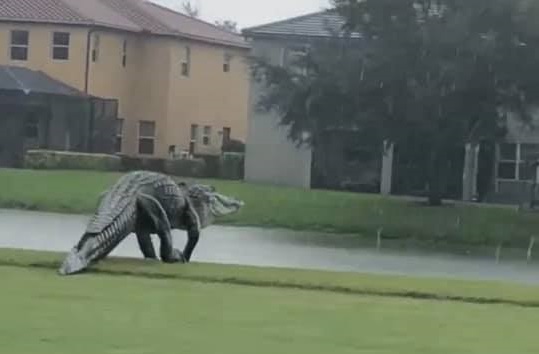 Residents of the American state of Florida faced the unexpected consequences of Hurricane Eta. Due to the impact of the elements, alligators began to emerge from the reservoirs. One of them was spotted on the golf course.

A photo of a giant reptile walking around the field was posted on Twitter by meteorologist Matt Davit.

“Healthy Florida alligator. Yes, this monster is real. Filmed during Hurricane Eta in Naples,” he wrote.

Alligators are not uncommon for this state, this time residents note that they have never seen such large ones.

On September 20, a large alligator was reported to have climbed into the courtyard of a private home in Alabama. He got out into the flooded streets after Hurricane Sally and went to inspect the new “possessions”.