In Yellowstone recorded unusual emissions on the largest geyser 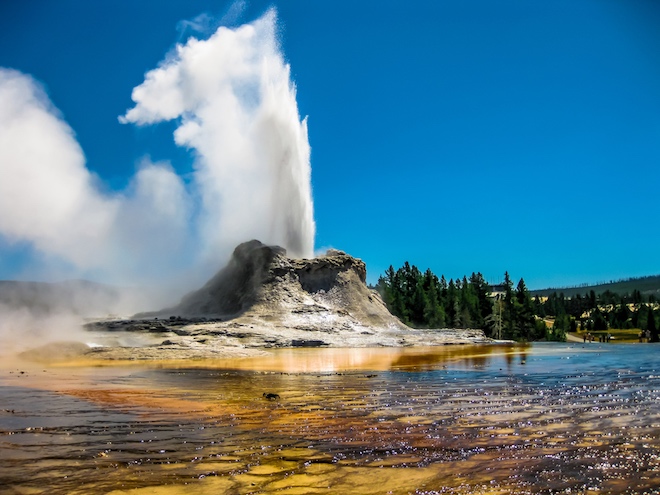 The world’s largest active geyser erupted three times in the past 6 weeks in the Yellowstone National Park, including once this week. This happened with an unusual pattern.

Geologists assure us that there is no cause for concern and these are not signs of an early destructive volcanic eruption.

The geyser “Steamboat” (Steamboat), which throws water into the air up to a height of 91 m, erupted on March 15, April 19 and April 27. The last time it erupted three times a year in 2003, according to the Yellowstone Observatory of the US Geological Survey.

“Nothing indicates that there is a volcanic eruption,” Michael Poland, scientist of the observatory, said in an e-mail. According to Poland, the eruption of “Steamer” this year was less than usual, but two eruptions in April by the amount of water discharged into the air were about 10 times greater than the eruptions of the famous “Old Faithful Geyser”.

Geologists do not identify the causes of the last series of eruptions, but they say that it can indicate some kind of thermal disturbance in the basin of the geyser, or that the Steamer can simply have several small eruptions instead of one large.

Since most geysers erupt not on any particular schedule, “it just might reflect the chaos of the geysers,” says Poland.
“There was no volcanic eruption in Yellowstone for over 70 thousand years! And geysers erupt all the time, “says Jay Lowestern, a geologist-researcher at the US Geological Survey, who specializes in volcanoes.