Increased risk of a powerful earthquake in Cascadia 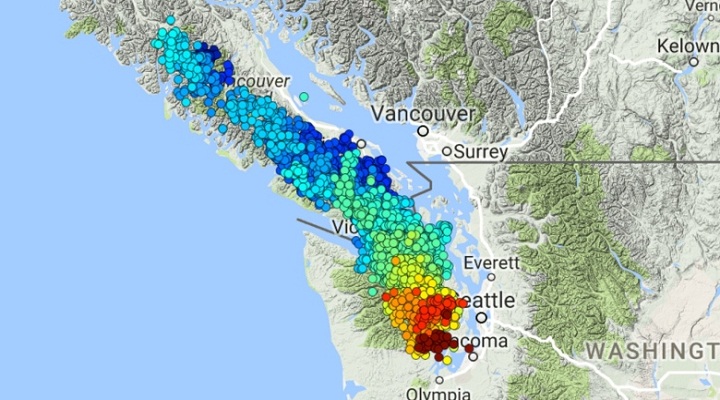 In the framework of observations of seismicity in British Columbia, experts of the Geological survey of Canada discovered an interesting and quite disturbing trend. On average, every 14 months on Vancouver island are thousands of tiny earthquakes have shaken the surface for two weeks. According to the seismologist Alison bird, those imperceptible tremors indicate a loss of stability of the island and near a major earthquake in the Cascadia subduction zone.

“Such a seismic series can be the last episode in a scenario called “the Big One on Cascadia”. Quite a bit of additional stress to result in mega-earthquake,” – said the expert.

The Cascadia subduction zone is a 900-kilometer fault stretching from Canada’s Vancouver island to Northern California. Fissure is a boundary between two lithospheric plates: the North American platform and submersible under her oceanic plate Juan de Fuca. As the movement of the Juan de Fuca slips under North America, however, sometimes it is trapped and can’t move on. Her translational motion is currently stored in the middle of the rocks and waits for the moment when the growing tension will be released as a mega-push.

According to Alison bird, a major earthquake could cause sudden rupture of the fault, resembling a flash of lightning. During a tiny earthquake every 14 months to the “locked” area and added additional tension that sooner or later even at the slightest load will cause it to release. 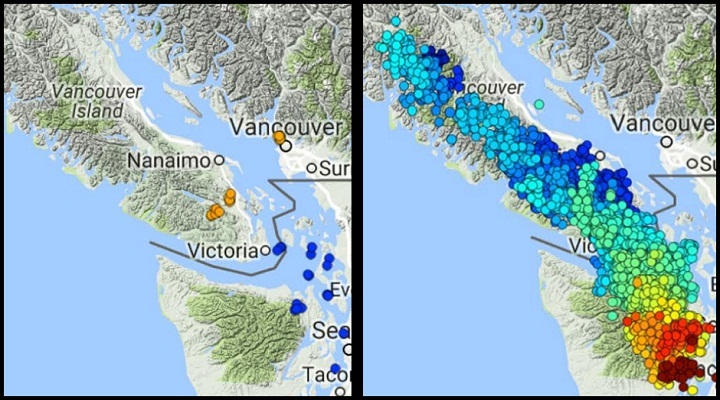 Left — normal seismicity in Vancouver in the summer of 2016. To the right is a series of thousands of quakes since late December 2015 to early January 2016.

According to estimates, the last series of thousands of small earthquakes were recorded at Vancouver from late December 2015 to early January 2016. Therefore, the next series could begin on the island in February 2017. But this does not mean that it is in this period need to wait for a mega-earthquake. Says Alison bird, it can occur at any time. “Everyone in my family keep shoes and flashlights under the bed. Each of us knows in what direction we go in the event of a disaster,” – says the expert.

Seismologists from Geological service of Canada is not the only scientists in the world who are studying slow slip of tectonic plates. In the area of Japan has a similar “locked” area, and the Japanese experts are well aware that the risk of a major earthquake here is increases on average with a periodicity of 1 year to 6 years.