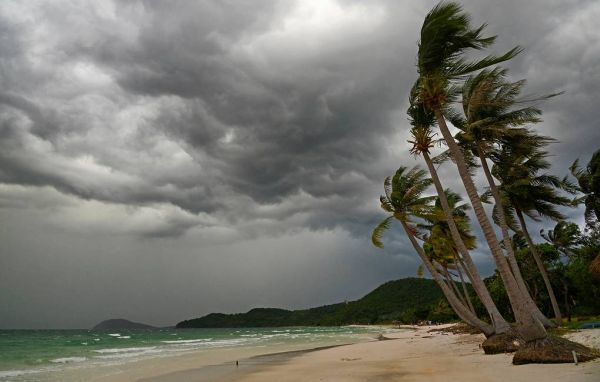 Over the past 50 years, oceanic hurricanes that reach land have become weaker over time much more slowly than before. Analysis of data on these phenomena and computer simulations suggest that this is due to an increase in average annual temperatures and other consequences of global warming. An article with the results of the study was published in the scientific journal Nature.

“The results of this study could have a profound impact on how we deal with the effects of global warming. We’ve known for a long time that global warming hurricanes will become more frequent and coastal cities are already preparing for it. You also need to prepare for this, “said one of the study authors, professor at the Okinawa Institute of Science and Technology, Pinaki Chakraborty.

In recent years, extreme weather events have become more frequent on the planet – floods, prolonged droughts, heat waves, hurricanes and typhoons. Scientists speculate that this is due to global warming. However, the exact mechanisms of its effect on the weather have not yet been fully understood.

Some climatologists and physicists believe that the increase in hurricanes is associated with an increase in the concentration of CO2 in the atmosphere. The associated increase in average annual temperatures, in their opinion, disrupted the circulation of heat and energy in the atmosphere. Their “surpluses” are hurricanes and tornadoes. Other scientists disagree with this and believe that global warming has simply “shifted” hurricanes to the poles, towards the coasts of North America and Asia, and their total number has not changed.

Chakraborty and his colleague Li Lin wondered if global warming influences the “behavior” of hurricanes when they land. As a rule, after they leave the ocean, hurricanes quickly lose their strength, as they lose access to water and moist air. These two factors play the role of the main source of energy for hurricanes.

Scientists believe that global warming could greatly affect the humidity of those regions of North America and Asia, where hurricanes often “drop in”. Guided by this idea, Lee and Chakraborty studied data from the last 50 years on the movement and impact of all hurricanes that originated in the North Atlantic and reached land.

The analysis showed that hurricanes weaken more slowly during this time than in the 1960s. Previously, a typical hurricane lost about 75% of its strength in the first day after hitting land. Now this figure is about 50%.

Climatologists have tried to theoretically explain this phenomenon. To do this, they created a computer model of a typical hurricane that hits the shores of the United States virtually every year. Thanks to this, scientists calculated how the rise in temperatures and the concentration of CO2 in the air affected the origin of Atlantic hurricanes over the ocean and the manner in which they moved over land.

It turned out that the unusually slow extinction of hurricanes could be due to the fact that, due to the rising water temperature in the Atlantic and changes in the nature of the movement of winds over its surface, water vapor in the core of the hurricane accumulates faster than before. Because of this, powerful hurricanes that reach the shores of North America have more energy, which is why they penetrate deeper into the continent and do not subside for longer than in the past.

“All this suggests that if we do not start to fully combat global warming, hurricanes that reach the continents will weaken more and more slowly. As a result, their destructive effects will affect not only coastal areas, but also regions far from the sea. That is, they will become even more dangerous for the economy and people’s lives, “concluded Professor Chakraborty.