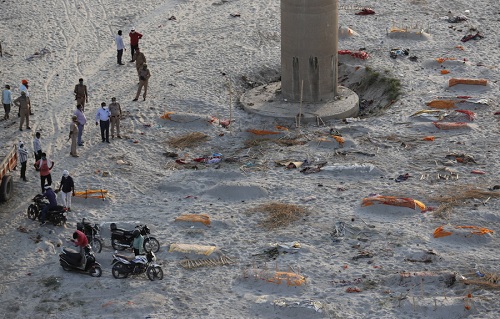 Police are appealing to villagers in northern India to investigate the discovery of bodies buried in shallow sand graves or dumped on the banks of the Ganges River, prompting speculation on social media that they are the remains of COVID-19 victims.

In jeeps and boats, police used portable loudspeakers with microphones, asking people not to dump bodies into rivers. “We’re here to help you do your last rites,” police said.

On Friday, rains exposed decomposed bodies buried in shallow sandy graves on a wide, flat riverbank in Prayagraj, a city in Uttar Pradesh.

Although officials say the riverbank burials have been going on for decades, their numbers in a pandemic environment have drawn increasing attention to the practice.

Navneet Sehgal, a state government spokesman, on Sunday denied local media reports that more than 1,000 bodies of COVID-19 victims have been recovered from rivers in the past two weeks. “I’m willing to bet those bodies have nothing to do with COVID-19,” he said.

He said some villagers did not cremate their dead, as is the Hindu tradition during some periods of religious significance, and instead disposed of them in rivers or dug graves on the banks of rivers.

Ramesh Kumar Singh, a member of Bondhu Mahal Samiti, a charity that helps cremate bodies, said the number of deaths in rural areas was very high and poor people were throwing bodies into the river because of the exorbitant cost of performing the last rites and lack of wood.

The cost of cremation has tripled to 15,000 rupees ($210). An Associated Press photojournalist estimated Saturday that there were at least 300 shallow graves on a sandy strip by the river near Prayagraj. Each grave was covered with an orange, yellow or reddish cloth. Several police officers were at the scene, but allowed the family, who arrived in a small truck, to bury the 75-year-old woman at the site. K.P. Singh, a senior police officer, said authorities had designated a cremation site on the banks of the Prayagraj River for those who died from COVID-19, and police would no longer allow any burials on the riverbank.

Last week, health authorities recovered 71 bodies dumped on the banks of the Ganges River in the neighboring state of Bihar. Authorities conducted an autopsy but said they could not confirm the cause of death because of decomposition. Last week, a dozen bodies were also found buried in the sand in two locations along the riverbank in Unnao district, 40 kilometers (25 miles) southwest of Lucknow, the capital of Uttar Pradesh.

District Magistrate Ravindra Kumar said an investigation was underway to determine the cause of death. India’s two major states, Uttar Pradesh and Bihar, with a total population of nearly 358 million, are among the hardest hit by a viral epidemic that has swept through the country and led to catastrophic deaths.

Helpless villagers rush to nearby cities to treat the sick, many of them dying along the way, victims of India’s crumbling health care system.

The number of new cases has stabilized after hitting a record high for several weeks, said Dr. V.C. Paul, a government health expert. The Health Department on Sunday reported 311,170 confirmed cases in the past 24 hours, up from 326,098 on Saturday. It also reported 4,077 additional deaths, bringing the total death toll to 270,284. Both figures are almost certainly grossly understated, experts say.

Stray dogs feeding on half-burnt bodies of COVID patients at the Bijakhaman cremation is making for a ghastly sight not to say leaving the local residents disturbed. The pictures have gone viral and people have urged the Sub Collector to look into the matter immediately. According to sources, most of the bodies are left half-burnt due to insufficient firewood and supervision by municipal authorities.

The administration is reportedly paying Rs 7,500 for cremating each body. Locals say partially-cremated body parts can be seen strewn across open fields near the crematorium, about 3 km from Balangir town. “When a Covid patient dies, we accept the fact that the body will not be handed over to the family.

But the least we can expect is a dignified cremation,” the relative of a COVID victim was quoted as saying by The New Indian Express (TNIE). Following allegations, Balangir Sub Collector Lambodhar Dharua visited the Bijakhaman crematorium on Sunday and directed the in-charge staff to clean the area. He assured people that proper cremation will be done in adherence to guidelines, the report added.