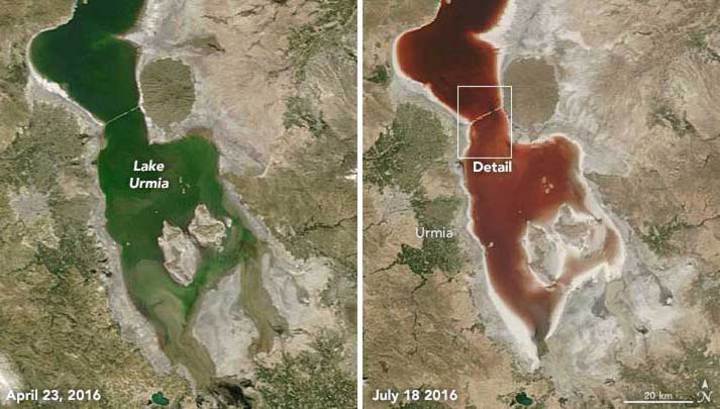 Iranian lake Urmia abruptly changed color, turning from green to red. Representatives from NASA published photos of the reservoir, which shows how dramatically it has changed. Urmia change “color” every year.

The reason for the color change of the lake is living in it the microorganisms. Every spring, the reservoir, which in recent decades is very shallow, is filled with new water from the mountains. In the summer the water level in Urmia falls, with the result that it increases the concentration of salt.

According to hydrobiologists, red coloration of Urmia receives from growing in the lake unicellular algae called Dunaliella. Initially they are green, but in conditions of high salinity and large amounts of salt can become red. According to another version, on the color of the water in the lake is influenced by living in Urmia halobacteria that produce red enzyme.

Scientists believe that in the coming year, the famous Iranian lake is less to become green and will go down in history as exclusively the red pond. This is due to the fact that the summer period in the region is becoming more arid, which limits the amount entering the lake fresh water.