Is the Earth a solar apocalypse 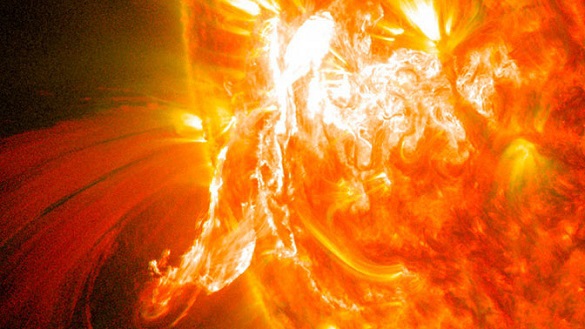 Astronomers from Harvard have estimated the time when a superflare occurs on the Sun, which can have a devastating effect on the entire human civilization. Counting was conducted by Abraham Loeb and Manasvi Lingam, using geological and astronomical data on similar events that took place on the Sun and other stars. Scientists have found out that super-flares on the Sun occur approximately every two thousand years: the star throws out about 1032 ergs into the space, which exceeds the energy that could be obtained by burning all the fossil fuels of the Earth. A cosmic catastrophe of this magnitude was recorded in 775 AD; Its repetition is expected in about 750 years.

“We conclude that the risk from superflares is not sufficiently appreciated and that mankind can witness their offensive leading to devastating economic and technological losses over the course of a thousand years,” says a study by Harvard scientists published on the Cornell University library website. It is noted that even small flares can disable electrical systems and destroy 10% of orbiting satellites. Such solar activity is also able to damage the ozone layer that protects the Earth from ultraviolet radiation; Excessive radiation will also lead to inhibition of photosynthetic organisms and DNA degradation.

Can a solar super-flare destroy the ecosystem and the infrastructure created by civilization? In an exclusive interview to Pravda.ru, the head of the laboratory of the Institute of Terrestrial Magnetism, Ionosphere and Radio Wave Propagation of the Russian Academy of Sciences, Doctor of Physical and Mathematical Sciences Vladimir Obridko told.

– What is the probability of the death of the Earth civilization as a result of a superflare on the Sun?

– According to our data, which we can indirectly trace back millions of years ago, there have never been such flashes on the Sun. They can not be, because the Sun belongs to the class of stars on which such supergiant flashes do not occur. There are separate stars where similar flashes occur, but they are completely different, sharply different from the Sun.

All our calculations, based on modern understanding of the physics of the Sun, show: the accumulation of energy so powerful as to cause a superflux is simply unrealistic. Even the so-called super-flashes that occur on young stars, in the worst case, can only lead to some disruption of activity on Earth: an increased change in the atmosphere, climatic indicators, but can not completely destroy humanity in any way.

It is worth noting that there are no such methods that would predict an outbreak in 750 years. We are able to predict for two or three days ahead. We can say that, for example, in 2025 the number of outbreaks will be somewhat larger, but this will be only an example. This is just like saying that in a few months winter will come; but at the same time indicate what kind of temperature there will be, on what day it will be cold, and in what heat it will be absolutely impossible.

– Is it possible to say that now the number of small flashes on the Sun has increased?

– No way. On the contrary, we are now experiencing a deep minimum of solar activity. Further, the Sun will be even less active. The number of geomagnetic storms did not increase. Nothing like this happens. And the factors that affect the Earth’s atmosphere should be discussed separately.

– That is, in the foreseeable future, the sun will not go out?

– The sun, of course, will someday go out, but it will be in a few billion years.