Is the Earth’s magnetic field flipping? 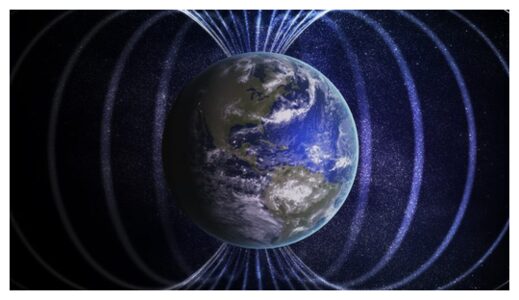 Over the past 200 years it has been slowly weakening and shifting its magnetic north pole (where the compass points, not to be confused with the geographic north pole) from the Canadian Arctic to Siberia. In recent decades, however, this slow southward shift has accelerated, reaching speeds of over 30 miles per year (48 kilometers per year). Could it be that we are on the verge of a geomagnetic reversal in which the north and south poles will switch places?

Earth’s magnetic field is created by the convection of molten iron in the planet’s core, located about 1,800 miles (2,896 km) below our feet. This superheated liquid generates electric currents, which in turn create the electromagnetic field. Although the processes that cause pole shifts are relatively less well understood, computer simulations of planetary dynamics show that pole shifts occur suddenly. This is confirmed by observations of the Sun’s magnetic field, which changes about every 11 years.

Scientists can’t say with certainty exactly what the consequences of the reversal will be – evidence of previous reversals remains unclear – but they could be serious. For example, many animals use the Earth’s magnetic field to navigate during migration.

In addition, the Earth is constantly bombarded by a stream of charged particles from the Sun and by cosmic rays, mainly protons and atomic nuclei, from deep space. In the period leading up to the reversal, the magnetic field becomes weaker and much less effective in protecting us from these particles.

Geologists note that mass extinctions coincide with these time periods (when the pole reversal occurred).

The direct impact on humanity can be significant. We use artificial satellites for navigation, broadcasting, weather forecasting, environmental monitoring, and communications of all kinds. Without magnetic field protection, these satellites can be severely damaged by solar winds or cosmic rays colliding with electronic circuits. The weak magnetic field in the South Atlantic Ocean, known as the South Atlantic Anomaly, is already negatively affecting satellites and may be a sign of things to come.

Recent geological studies have suggested a possible cause for this anomaly. It is widely believed that our Moon was formed when the Earth collided with the planet Teia 4.5 billion years ago, but the remains of Teia have never been found. Now it turns out that the remains of Teia may lie beneath our feet.

Buried deep within the Earth are two enormous volumes of rock, each millions of times larger than Everest (and expanding), and denser and hotter than the rest of the Earth’s mantle. Scientists speculate that these rock masses are the missing remnants of Teia and that they impede the convection of molten iron, resulting in a weak magnetic field in the South Atlantic.

Regardless, the severity of the magnetic reversal will depend on how long it takes. If it occurs slowly, over many thousands of years, it is possible that migrating animals, and humanity as well, will be able to adapt. But if the pole reversal happens suddenly (as it happened in the past) things could be very serious…