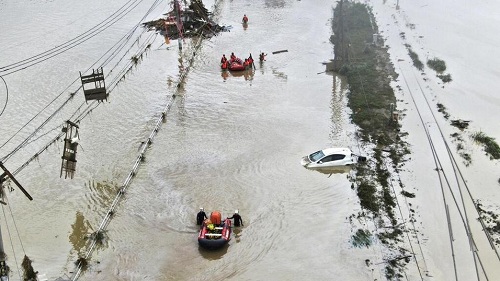 Heavy rains pounded parts of Japan’s southwestern main island of Kyushu from the night of May 16 to May 17, prompting landslide warnings and evacuation orders in Kumamoto Prefecture.

Deluge warnings were also issued for the prefecture, as well as in Kagoshima, Miyazaki and Oita prefectures. The rains were triggered by warm damp air flowing into a wet season rain front.

At about 3:48 a.m., a town resident called emergency services to report their ground floor had flooded. According to the town, the nearby Myoken River burst its banks, inundating about 30 homes. No injuries were reported.

According to the Japan Meteorological Agency (JMA), 90.5 millimeters of rain per hour fell on the town of Yamato, Kumamoto Prefecture, up to 6 a.m. on May 17 — a record high for the month of May. In the 24 hours up to 10 a.m. on the same day, the town was soaked with a total of 240.5 mm of rain, another May record. Elsewhere in the prefecture, 170.5 mm fell on the village of Minamiaso and 167.5 mm fell on the city of Aso.

On May 17, the JMA is forecasting 60 mm of rain per hour in Oita and Kumamoto prefectures, 50 mm for Kagoshima, Miyazaki and Nagasaki prefectures, and 30 mm for Fukuoka and Yamaguchi prefectures. In the 24 hours up to 6 a.m. on May 18, 150 mm of rain is expected for the Kyushu and Tokai regions, 120 mm for the Hokuriku region on the Sea of Japan, and 80 mm in western Japan’s Chugoku area.

The agency is calling for caution over possible landslides and flooding in low-lying areas, and to beware of rising river levels.