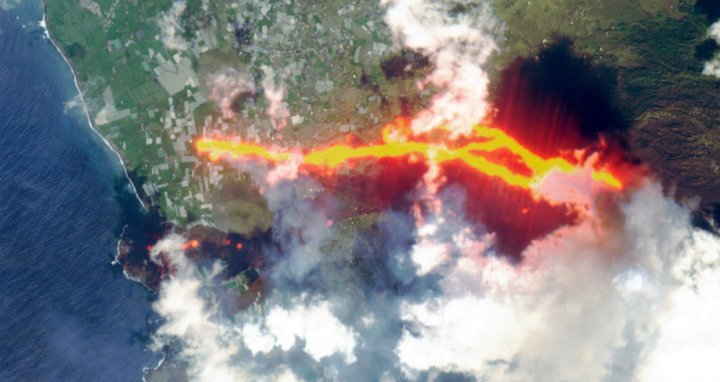 The volcano that began erupting on Sept. 19 on the island of La Palma in Spain’s Canary Islands has once again demonstrated its destructive power.

The collapse caused a “marked increase” in the amount of lava flowing out of the volcano, and dumped tens of cubic meters of molten rock.

Chunks of molten lava the size of three-story houses rolled down a hillside on the Spanish island of La Palma as a series of tremors shook the ground Sunday, three weeks after the volcano erupted.

The collapse of the northern part of the cone produced three new lava flows. The most dangerous one advanced toward the El Callejón de la Gata industrial area in the town of Los Llanos de Aridane.

The Institute of Volcanology of the Canary Islands (Involcan) reported Sunday that the lava has destroyed the few remaining buildings north of the Todoque urban area, which was almost completely engulfed by the magma flow between Sept. 30 and Oct. 1.

Meanwhile, families are still evacuating their homes three weeks after the eruption began.

The collapse of the northern part of the volcano led to a tense 24 hours, not only because lava flowed from the crater in different directions, but also because the volcano became more explosive.

The new lava flows split into two branches, both north of the main flow of molten rock.

One is now moving further north and reached Callejón de la Gata on Sunday. It is moving at a slow speed of about five meters per hour. Authorities are closely monitoring its progress to see if steps need to be taken to protect the local population.

The second branch has already crossed LP-213 and is moving north-south between Todoque and Puerto Naos in the town of Tazacorte. This branch is expected to move parallel to the main stream and reach the sea, passing north of Mt. Todoque.
It is important to note that when the main flow reached the Atlantic Ocean in late September, it skirted the south side of Mt.

A stream of red-hot lava flowing from the Cumbre Vieja volcano on the Spanish island of La Palma engulfed a cement factory on Monday, raising a thick cloud of smoke and forcing authorities to announce the evacuation of people in the area.

Local emergency services instructed residents of El Paso and Los Llanos de Aridane to stay indoors, close windows and turn off air conditioners to avoid inhaling toxic fumes from the burning plant as it is gradually absorbed by the lava.

So far, the lava has affected 600 hectares, which means the area increased by 10% overnight. This includes 132 hectares under agriculture, which is one of the main economic drivers of the island.

At its widest point, the river of molten rock stretched 1,520 meters.

According to the latest data from Europe’s Copernicus surveillance system, the lava has completely or partially destroyed 1,186 buildings and another 95 are threatened.