La Palma volcano continues to erupt in the Canary Islands 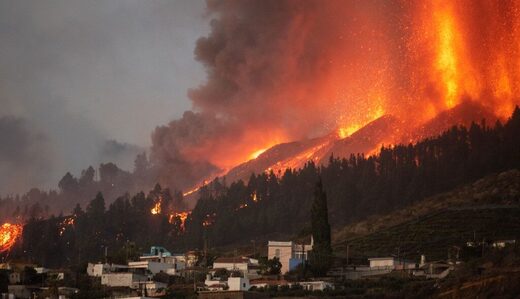 ﻿
Lava has destroyed more than 400 homes, more than 6,000 people have been evacuated. Authorities on the Canary island of La Palma have urged residents to stay away from the ongoing volcanic eruption.

The island was put on high alert after more than 22,000 tremors were recorded during the week in Cumbre Vieja, one of the archipelago’s most active volcanic regions.

Local authorities began evacuating people and some farm animals from nearby villages even before the eruption, which occurred at 3:15 p.m. local time Sunday on a wooded slope in the sparsely populated Cabeza de Vaca region, according to the government.

The volcano that erupted last Sunday on the island of La Palma continues to spew streams of lava. According to the latest information, the lava has already destroyed more than 166 homes. On Tuesday night it became known that in addition to the main caldera formed in the volcanic range of Cumbre Vieja, a second eruption began in the nearby area of Tacanda, leading to additional evacuations from the area.

A new mouth of lava flows formed about one kilometer from the main one.

According to the latest data, the lava flow has reduced its speed from the original 700 meters per hour to 300. Specialists predict that it could reach the coast today, increasing the risk of poisoning by toxic gases that will begin to be released when the lava hits the ocean water.

Mariano Zapata, Chairman of the Island Council, told local radio station Cadena Ser that apart from residential houses the lava has destroyed a significant number of agricultural and livestock farms as well as several family businesses. The European satellite Copernicus data show that the lava has already covered more than 103 hectares of the island’s surface.