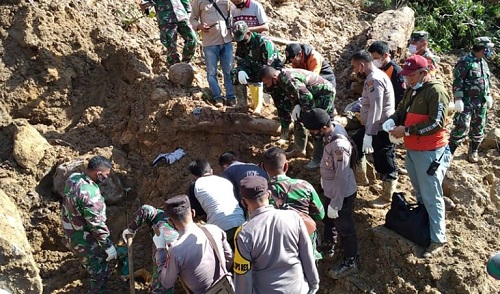 Landslides have killed at least three people at a Chinese-backed power plant on the Indonesian island of Sumatra, the emergency management agency said, fearing the death toll would rise.

“Three people were killed,” agency spokesman Raditya Jati said. “Rescuers are still looking for other victims,” he added, without giving a figure.

A local official in charge of disaster response said at least nine people were missing and presumed buried under a mountain of mud and debris, including a Chinese employee of the Batang Toru hydropower plant.

Deadly landslides and flash floods are common in the Indonesian archipelago during the rainy season.

This month, more than 200 people died in the Far East island cluster and neighboring East Timor when tropical cyclone Serodja turned small communities into wastelands of mud and uprooted trees.

Seroja, one of the most devastating hurricanes to hit the region in recent years, forced thousands of people to flee to shelters.

The Indonesian Emergency Management Agency estimates that 125 million Indonesians — nearly half the country’s population — live in areas at risk of landslides.

According to environmentalists, these disasters are often caused by deforestation and poor mitigation planning.