Landslide in Kyrgyzstan in a photo from space 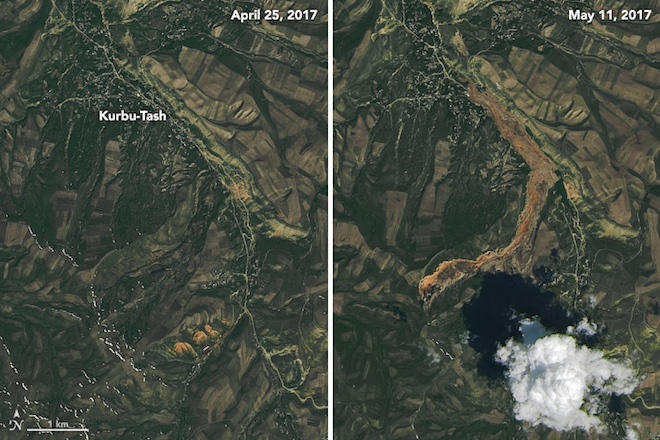 In April, near the village of Kurbu-Tash in southern Kyrgyzstan, the mountain slope, oversaturated with moisture due to snowmelt and precipitation, collapsed. Over the next weeks the river of fine-grained soil slowly drained into the valley, absorbing dozens of houses.

The picture on the right with the image of the descended landslide was received on May 11 by the Operational Land Imager (OLI) tool on the Landsat 8 satellite. Recently, the naked soil has a tan color. For comparison: the image on the left shows the same area on April 25. According to the Ministry of Emergency Situations of Kyrgyzstan, the landslide displaced 2.8 million cubic meters of soil.

People living in the foothills of the Tien Shan in southern Kyrgyzstan, face an unusually high risk of landslides. This is facilitated by factors such as the presence of active faults, steepness of terrain and specific types of soils. For example, in many cases there is loess in the rocks, since the fine-grained soil becomes very unstable when saturated with water.

Episodes of strong rain, melting snow and small earthquakes often lead to the descent of rocks. The risk is especially high in the spring, when downpours are most likely. Since the territory is densely populated, landslides annually take lives and destroy houses.