Landslide in the Valley of Geysers in Kamchatka 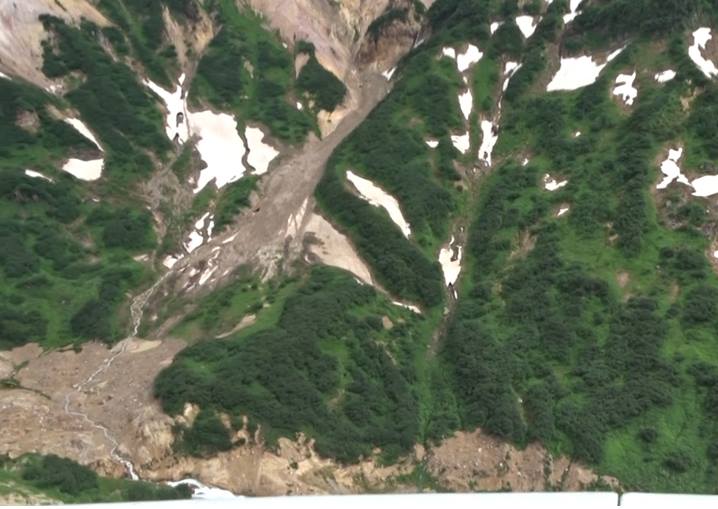 The tongue of the landslide, about 300 meters long above the Triple waterfall, was discovered by the employees of the Kronotsky Reserve during the flight of the geyser gorge. The descent of the mudstone mass was triggered by heavy rains that passed over the southeastern part of Kamchatka last week.

According to preliminary estimates, the volume of descended rocks amounted to about 30,000 cubic meters. This is 100 times less than during the descent of the landslide in January 2014. Then the dam, formed by a mudstone mass, formed a new pond lake in the upper reaches of the Geysernaya River with an area of ​​700 to 200 meters.

“As you can see from the helicopter, the rocks that form the banks of the reservoir are not washed out. Therefore, a dam break is not expected. As for the Triple Falls, on which the micro-landslide came down on July 25 or 26 as a result of the downpours, it is far from the excursion zone – the danger did not threaten the staff and visitors of the Kronotsky Reserve, “said Rinat Faizulin, the head of the department of ecological education and cognitive tourism of the Kronotsky FGBU State nature reserve “.

The main purpose of visiting the Valley of Geysers was to change temperature loggers and obtain data on the mode of operation of geysers, which are monitored continuously. It’s Big and Giant.

“Geyser Big works like a clock – it erupts every 67 minutes, throwing boiling water to a height of 10 meters. The fountain of the Geyser Giant, the channels of which were clogged with a mudstone mass in January 2014, does not exceed 1 meter, as in the previous three years of observations. Temporarily due to the rise in water level by 30-40 centimeters in the Geyzernaya river, the work of the Veyer geyser is disrupted, its bath is flooded, as soon as the water falls, the regime will be restored, “said Aleksey Kiryukhin, a senior scientist at the Kronotsky State Reserve FGBU, hydrogeologist.

We add that after landslide processes on the slopes of the geyser gorge, employees of the Kronotsky Reserve and volcanologists have been watching since 1985. Specialists note that the more rock layers descend, the more actively the hydrothermal activity of one of the seven wonders of Russia develops.