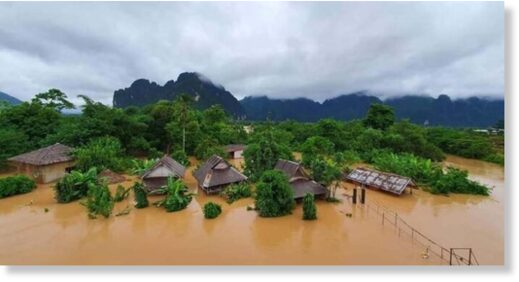 Parts of northern and central Laos suffered flooding after Tropical Storm Koguma swept over Laos over the weekend.

According to local reports, floodwaters rose in Pha Udom district in Bokeo province and washed away houses. Authorities have yet to issue an official report on the extent of the damage.

Meanwhile, the Nam Hung River in Xayaburi province today burst its banks, flooding rice fields and penetrating villages and towns along the river.

Several parts of Khung District in Xiengkhuang Province were also flooded, with landslides causing damage and cutting off roads.

Water levels in rivers across the country are reportedly rising to dangerously high levels, and local authorities are warning residents in nearby areas.

Heavy rains during the rainy season cause floods and landslides in Laos, affecting crops and livelihoods.