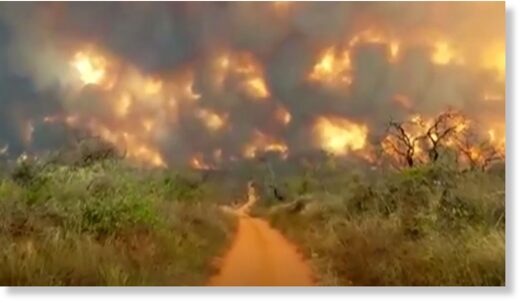 More than 280,000 hectares of Bolivian forest have been devastated by wildfires in an area inhabited by an isolated indigenous community near the Brazilian border, authorities said.

The Santa Cruz Fire Department in Bolivia reported that 15 fires are still burning and continue to threaten the Nembiguasu Reserve in particular.and

Nembiguazu means “great refuge” and is home to the indigenous Ayoreo community, which is in voluntary isolation, as well as jaguars, anteaters, cougars and night monkeys.

During the previous two years, there had been reports of fires in the area.

Jovenka Rosado, head of the Santa Cruz Forest Fire Department, said: “Our firefighters work in coordination with military personnel from the armed forces, technical personnel from the municipality, and National Park rangers from various protected areas.”

Across Bolivia, more than 749,000 hectares (2,890 square miles) had burned by the end of July – 62 percent more than during the same time period in 2020 – according to the Friends of Nature Foundation.

The fires are often started by farmers and ranchers to increase yields, but due to very dry conditions and wind, they quickly lose control of the flames.

The region is experiencing strong winds, which environmentalists say are contributing to the recent fires.