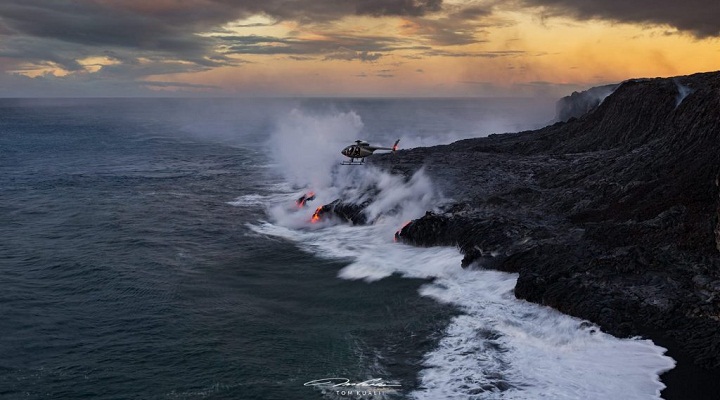 The lava flow of the Kilauea volcano, which has for months drains into the ocean in the South-Eastern part of Hawaii has increased the size of the island is 2 hectares or 0.02 square km). Hot volcanic materials, constantly spewing from the crater Puu OO, not only added sushi, but formed a vast lifeless area with a width of about 1 km, from the volcano slopes down to the Pacific ocean.

At the moment, the geologists had an opportunity to see how Hawaii was formed. The eruption of Kilauea extends the island as well as it once did neighboring volcanoes Mauna Loa and Mauna Kea and how it might be to do in the future lurking at the bottom near the South-Eastern coast, the underwater shield volcano Loihi.

Along with the outpouring of lava on Kilauea continues high eruptive activity with the emission of sulphur dioxide and circulating lava lake in the crater Halema-Mind-U. In the area of the crater Puu OO seen inflation of the soil, which likely evidence of raising to the surface portions of fresh magma.

This assumption is supported by the rise of the level of the lava lake at very high altitude over the last year (20 m below the crater rim), and two fairly large quake of magnitude 3.5 and 3.8, recorded August 24, about 5 km from the East rift zone of Kilauea.