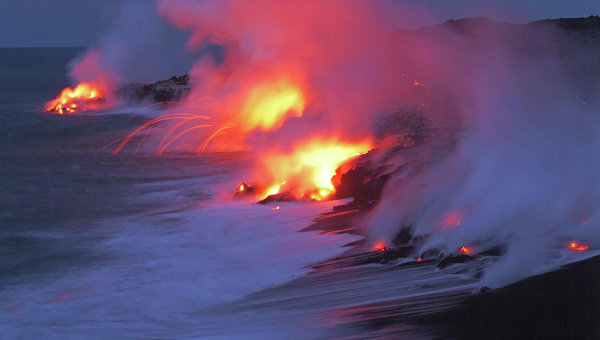 Outpouring of magma from a newly awakened volcano Kilauea Hawaii are just a few hundred metres from the shore of the Pacific ocean, which can lead to a series of powerful explosions and emissions of steam that could threaten the well-being of the inhabitants of the archipelago, according to the USGS.

At the end of may began another eruption of Kilauea volcano, Hawaii, a heightened level of activity which is observed in March 2011. Over the past six weeks, the lava flows leave the mouth of this shield volcano, was moving toward the Southeast, toward the Pacific coast.

According to scientists, the lava moves relatively quickly, and every day she overcomes 400-600 meters distance. On the weekends it is very close to the ocean, to the waters remained less than a kilometer.

The last time the emissions from Kilauea reaching the Pacific ocean three years ago, and this event was accompanied by explosions, the formation of hot jets and a couple of other events that are potentially dangerous for tourists and locals, which are now closely matched to the flow of molten rock.

On the other hand, the lava flow poses no threat to nearby settlements, as it removed from them at a sufficiently large distance. United States geological survey (USGS) maintains continuous stream of observations of the lava flow on its website, where anyone can see the current situation in the Hawaiian Islands.