Lava from the Kilauea volcano reached the Pacific 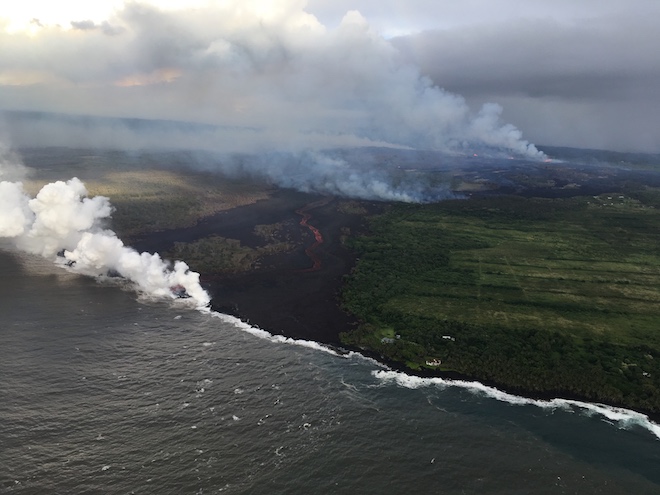 Lava flows from the erupting Kilauea volcano on the island of Hawaii reached the Pacific Ocean. Now the lava has passed 24 km to the west of the volcano, reaching the southern coast of the island.

As a result of the ingress of lava into the sea water, a chemical reaction occurred, which led to the formation of a toxic vapor cloud. The authorities asked residents and tourists not to approach the areas that are near the erupting volcano, as well as being away from the cloud. According to the US Geological Survey Wendy Stowall, if the wind changes direction, the lava flows will also change the direction of movement.

Earlier, because of the eruption, a “red” (maximum) level of danger for aircraft due to ash and smog was declared. As a result of the increased activity of Kilauea erupting since 1983, 23 cracks formed in nearby areas, of which lava flows. The situation became dangerous on May 3, when cracks first appeared in a residential area – from that time about 10 thousand people were evacuated, 40 houses were destroyed, 1 person was injured. On May 10, by decision of the Governor of Hawaii State David Ige, the Pune area was declared a disaster zone.

Based on local mythology, the Kilauea volcano is considered the habitat of the Hawaiian goddess of Pele volcanoes. In honor of her, several lava formations were named – Pele’s tears (frozen lava drops in the air), Pele seaweed (volcanic glass from the frozen walls of bursting lava bubbles flowing into the ocean) and Pele’s hair (lava splashes and splashing in the wind).