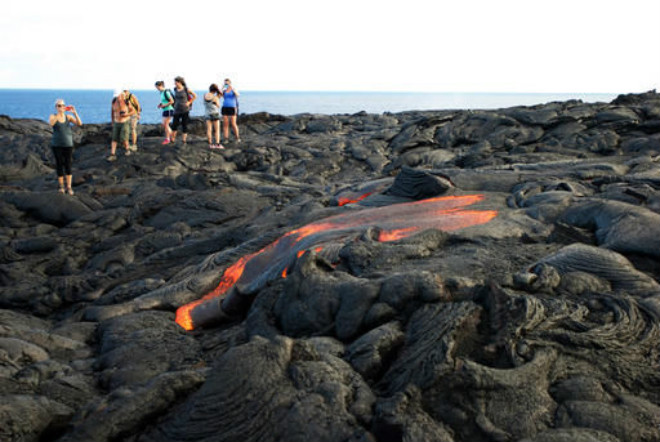 For the first time in three years the lava from a volcano on the Big island of Hawaii crept down the mountain and falls into the Pacific ocean, where it creates a new earth and a terrific show for the visitors.

Thousands of people from all over the world get to volcanoes National Park on Hawaii by land, sea and air to see the lava. They can also hear the wildness of nature and to smell her. Wavy, bright orange lava crackles and hisses, around the smells of brimstone and scorched earth. When the hot stones fall into water, they produce plumes of steam and gas and sometimes explosions, sending pieces of burning debris into the air.

Kilauea is one of the most active volcanoes in the world. Crater Puu OO began erupting in the 1980s and periodically pushes a sufficient amount of lava that can be seen by visitors.

The volcano Park in Hawaii is visited daily by 1000 to 1500 people, now attendance has grown to about 6,000 people a day. But warn tourists about the danger. The soles of the shoes become hot. In addition, the area adjacent to the hot lava as sharp as glass. Many people suffer from the cuts, trying to cross uneven terrain.

According to USGS, the flow of Puu OO has created about 500 acres of new land since the beginning of the eruption. A new lava flow, which started in may this year, has already created about 8 new acres of land.

Much of the activity of Kilauea had been no explosion, but an eruption in 1924 threw the ashes and a 10-ton stones in the sky, one person was killed.