Lava wave from Kilauea destroyed the building in the evacuated area 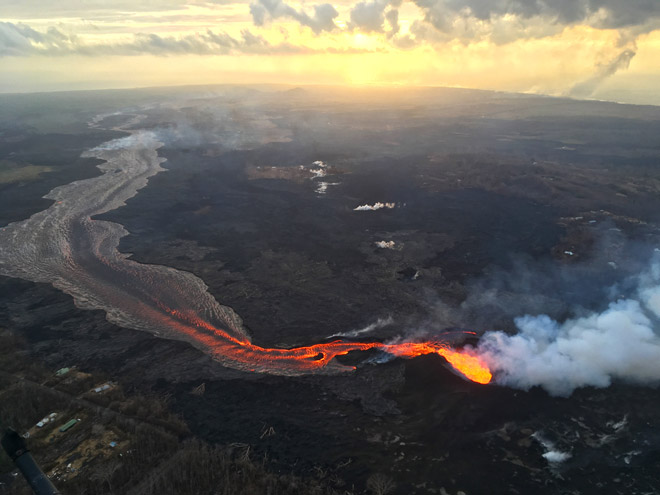 The eruption, which brought down the top of the Hawaiian volcano Kilauea on Wednesday, produced a wave of lava that destroyed the building in the evacuated area, according to geologists and civil defense authorities of the Big Island.

The explosion caused by the gradual collapse of the volcano crater was equivalent to an earthquake of magnitude 5.3. Lava has traveled a length of 40 km to the east, having destroyed at least one house in Lehalani Estates.

Lava waves on the Big Island of Hawaii cause more and more fears. The eruption of the volcano has been going on for 11 weeks, 712 houses have been destroyed, and, fortunately, there are no victims.

The strongest eruption on Monday was caused by the molten rock flowing into the ocean. As a result, the volcano threw a “lava bomb” on the roof of a tourist boat, injuring 23 people.

Geologists say that such explosions can occur because of the huge volume of lava that flows quickly into the Pacific Ocean.

The devastating eruptions in the Kilauea crater called Halemaumau occur every 30-35 hours when the crater top settles, like a balloon slowly losing air. Lava from the lava reservoir flows to the east under the earth, and then breaks out of the crack and enters the ocean.

Thousands of residents of the Big Island have been evacuated, since lava covers 32 square kilometers of agricultural land, jungle and populated areas.

The large island grew by 283 hectares, which is equal to the size of 400 football fields due to the fact that the lava falls into the sea. Last week, for a short period of time, a small island was formed.

Lava spread to 700 meters in the place of descent for boats Isaac-Hale Park in the area of ​​Pohoika. The locals made a boat trip to make the last visit to a place that would soon be destroyed by lava.

Since Monday, when there was an incident with a tourist boat, the authorities receive many requests for a survey site onshore for growing lava tourism in Hawaii.

Administration of the District of Hawaii is trying to find a suitable place, safe for visitors.