Lightning blows a hole in a highway in Walton County, Fla.USA 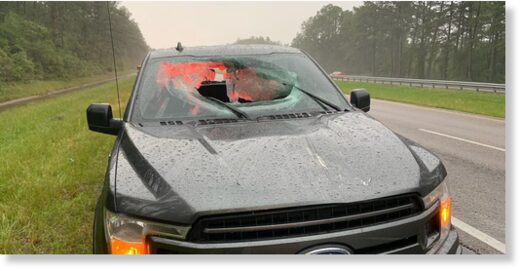 Lightning blew a hole in a highway in Walton County, Fla.

Two people were injured by lightning in Walton County, Florida. As severe thunderstorms swept through Florida, many lightning strikes occurred, including those to the ground. One of those discharges hit the east side of I-10 near mile 81. The lightning strike sent a piece of highway flying into the air.

Both passengers in the pickup were taken to the hospital, according to a Walton County Fire Department Facebook post.

When lightning moves from cloud to ground and vice versa, it can heat the air around it to 50,000 degrees Fahrenheit. By comparison, that’s five times hotter than the surface of the sun.

The result is an extremely dangerous transfer of energy between the lightning itself and the object it strikes. And that can be low objects – contrary to what many people think. Always treat lightning as a danger, no matter what you do.