Lightning over the USA. Satellite view 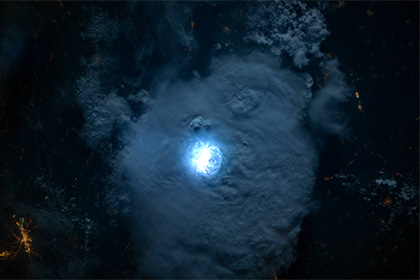 Watching the lightning from Earth is an exciting activity. But electric storms are even more incredible when viewed from outer space.

Astronauts and astronauts on the International Space Station have exclusive views, but NASA’s new NASA GOES-16 satellite makes this perspective accessible to all. Recently, he photographed a huge electric storm that swept over the east of the United States.

The newest Geostationary Operating Environmental Observing Satellite (GOES), launched in November 2016, rotates in Earth orbit at an altitude of 35.8 thousand km above the Americas and collects weather information for services such as the National Oceanic and Atmospheric Administration.

The device is still arranged in orbit, but the first video is a strong beginning of its mission. A short movie on which the storm was recorded on April 28-29, which gave birth to a lot of lightning, a pair of tornadoes and a blizzard in Kansas, offers a view of this weather event from a new angle.

Most instruments on Earth track only lightning strikes from clouds to the ground, but GOES-16 can see and lightning striking from the cloud to the cloud. This helps meteorologists to judge the strength of the storm. Precise information is an early warning. For those who have to seek shelter or evacuate in anticipation of a storm, an extra 15 minutes can change everything.