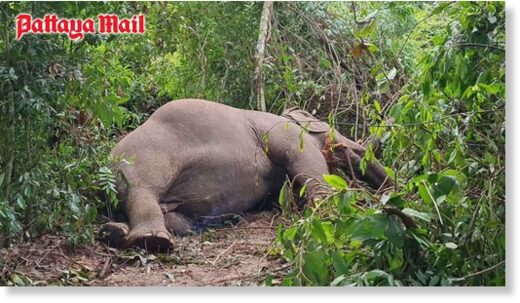 A 40-year-old elephant died after being struck by lightning at an elephant camp in Pattaya.

Mahout Somnuk Tidsandod, 46, reported finding the elephant’s carcass under a tree. The elephant had electrical burns on two of her ankles, the exit point of the lightning bolt.

Veterinarian Padet Siridumrong, an elephant specialist at Nernplabwana Animal Hospital, concluded that the elephant had been struck while on a chain in the woods.

Standing under a tree with a metal chain is one of the worst places to be during a lightning storm like the one that happened Friday.

The owner of the elephant camp in Pattaya, Pairat Chayakum, said he regretted the elephant’s death. During the coronavirus pandemic, the elephants were idle, and the camp’s only income was from the coffee shop.

Thirteen elephants remained in the camp after the death.