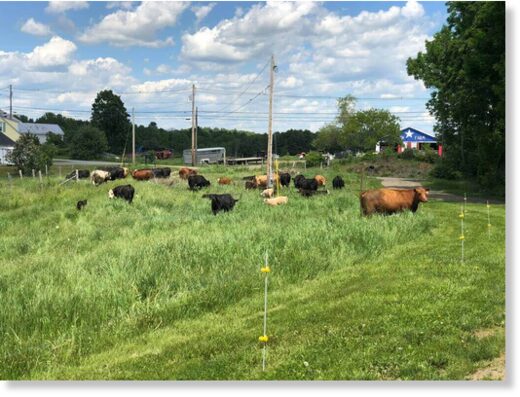 Lightning struck a tree near where eight cows were located. All of them were electrocuted and died.

These eight heifers made up 10 percent of Fortin’s 80-head Angus breed beef herd. The loss is a huge economic and emotional blow to the Winslow farm, which has been owned by the Fortin family for four generations.

“The thunderstorm hit around 5:30 and only lasted about an hour, but there was a lot of lightning nearby,” Fortin said. “My neighbor calls and says, ‘Hey, lightning just struck a big pine tree at the top of the hill, and I’ve got dead cows up here.'”

Fortin leases the land where the cows graze from this neighbor.

“It was very unpleasant to see,” Fortin said. “I had a lump in my throat and all I could do was watch and try to make sense of it all and figure out what to do next because I had to get them out of there.”

Fortin said the landowner lived near where the lightning struck, and he didn’t want that man’s children to see dead animals. The lightning was strong enough to throw several cows 10 to 20 feet into the gate panels, which were damaged by the impact.

The meat could not be saved because the heat from the lightning partially cooked the animals and they immediately began to spoil, Fortin said. The carcasses were taken to a processing plant where they were turned into compost.