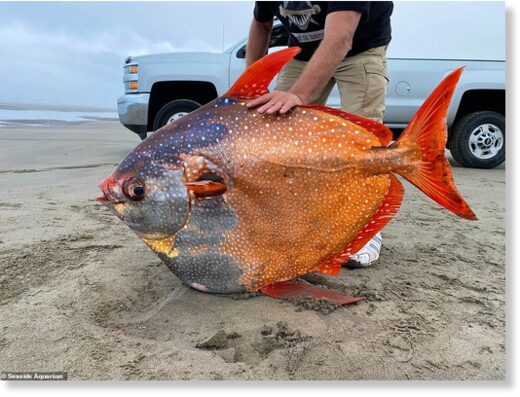 A strange-looking fish was dumped on the coast of Oregon in the United States, a stunning sight for beachgoers and an unusual find for the local oceanarium.

The 3.5-foot, 100-pound moonfish was discovered on Sunset Beach north of Seaside Wednesday morning and was quickly reported to the Seaside Aquarium, which placed the fish in a freezer to preserve it for future educational opportunities, the aquarium said.

The fish is usually found in warmer tropical waters, but is often found along the Oregon coast as well. In 2009, a Milwaukee man caught one weighing 97 pounds while tuna fishing near the mouth of the Columbia River.

Opas are disc-shaped fish, meaning they are shaped like a large disc. Their average weight is about 100 pounds, according to the National Oceanic and Atmospheric Association, although some larger species can grow over six feet long and weigh up to 600 pounds. The fish has pronounced coloration, with bright red-orange fins.

The Seaside Aquarium reported that one lucky school group will get a chance to dissect the big fish in the upcoming school year.