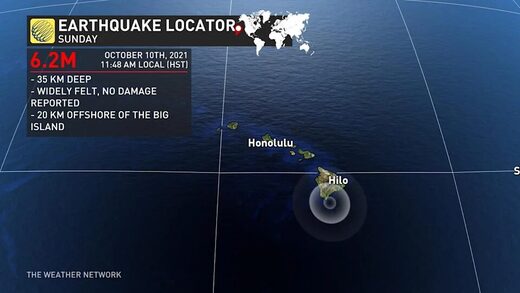 The U.S. Geological Survey (USGS) reported that a magnitude 6.2 earthquake occurred Sunday afternoon near the Big Island of Hawaii.

The quake struck at 11:48 Hawaii time (5:48 p.m. ET) about 27 kilometers southeast of Naalehu, or the southern tip of the Big Island. Several small aftershocks occurred nearby after the earthquake.

According to several hundred responses to the USGS’s “Did you feel it?” query, users can report the strength of the tremors and the destruction they experienced during the quake.

Residents felt noticeable tremors even on Maui, about 250 km northwest of the quake’s epicenter.

The U.S. Pacific Tsunami Warning Center said the agency did not expect a tsunami. The earthquake occurred more than 35 kilometers below the surface.

The Big Island is home to Kilauea, one of the most active volcanoes in the world. Kilauea recently erupted for the first time in nearly a year. Previously, magma moving beneath the volcano caused a swarm of more than 100 earthquakes in late August.